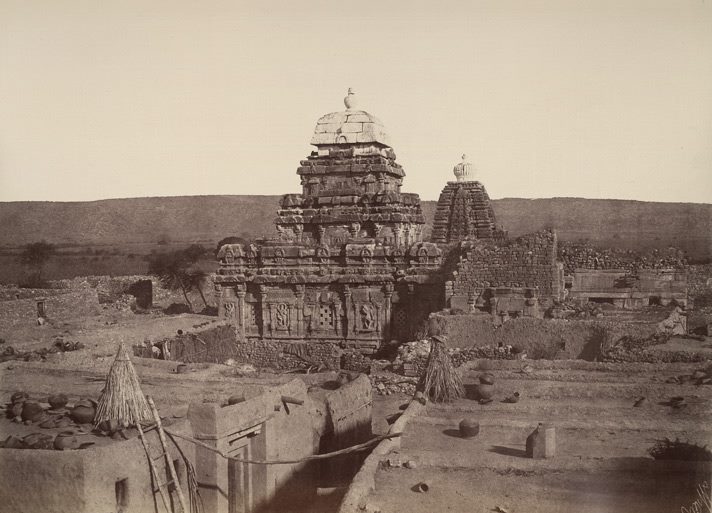 Photograph of the Sangameshwara Temple at Pattadakal in Karnataka, taken by Thomas Biggs in 1855, from 'Architecture in Dharwar and Mysore'. Pattadakal, like neighbouring Aihole and Badami an important centre of the Chalukya dynasty, is located on the Malaprabha river in north Karnataka. The Chalukyas were a dynasty with different branches which ruled over parts of the Deccan (now in Karnataka, Maharashtra and Andhra Pradesh), in different periods. Pattadakal is believed to be the site where the coronation ceremonies of the Early Chalukya kings took place, between the 6th and 8th centuries. Nine temples, dedicated to Shiva and surrounded by minor shrines, line the west bank of the river, and a Jaina temple, from the later Rashtrakuta period, lies about a third of a mile away. The temples with their diverse styles represent the finest achievement of early Chalukyan architecture, and Pattadakal is now a World Heritage Site. Some of them are in the southern or dravida style and some display the northern or nagara style of temple architecture. The Vijayeshwara temple, commonly known as the Sangameshwara, is in the southern style. It was commissioned by Vijayaditya (ruled c. 696-733) but left unfinished at his death. It comprises a square sanctuary with an antechamber and a large pillared hall. The outer walls are decorated with sculpture panels and perforated stone widows with geometric designs.

What a beautiful photograph!

Beautiful! Will add it to list of temples to visit

Go to badami and see even better cave temples

Beautiful site and also unknown for people living in north. Thanks.