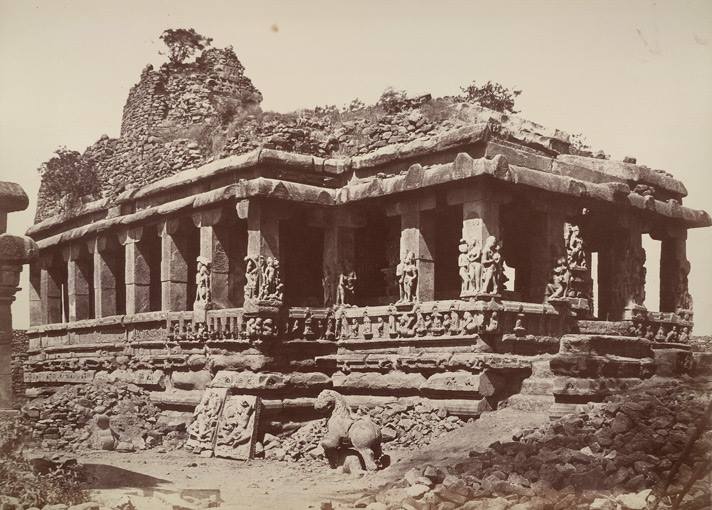 Photograph of the Durga Temple at Aihole, in the Bijapur district of north Karnataka, taken by Thomas Biggs in 1855, from 'Architecture in Dharwar and Mysore'. The Chalukyas were a dynasty with different branches which ruled over parts of the Deccan (now in Karnataka, Maharashtra and Andhra Pradesh), in different periods. Aihole, situated near the banks of the river Malaprabha like other Chalukyan sites of Badami and Pattadakal, was an important centre of the Early Chalukyas (Chalukyas of Badami) who flourished between c.543 and 757 AD. Little is known of this ancient town, inscriptions suggest that it was a commercial centre. It has the remains of about 150 temples, a diversity of forms dating from the mid-6th century to later structures from the period of the Rashtrakuta dynasty (c.752-973) and the later Chalukyas of Kalyana (973-1189). The architectural forms of the early temples are considered by scholars to be indicatory of the evolution of the Hindu temple structure. The name of the 'Durga' temple refers to a fort rather than the goddess and the temple may have been originally dedicated to the sun god. Its apsidal-ended form is derived from earlier Buddhist chaityas or prayer halls. Built on a high plinth, it is surrounded with an open colonnade, and its semi-circular sanctum is crowned by a now-fragmentary tower. It is decorated with fine sculptures, particularly on its outer piers. Friezes adorn its basement and the doorway of its mandapa or hall is flanked with elaborate carvings.

Thanx for sharing our heritage with us.