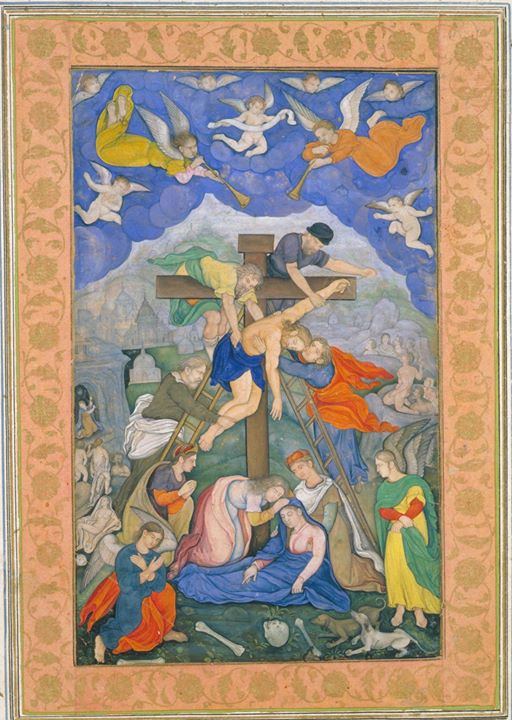 Digital Rare Book:
Jesuit missionaries in northern India and inscriptions on their tombs, Agra (1580-1803)
by H.Hosten
Published in Calcutta - 1907

Excerpt:
In 1600, Fr. Francis Corsi was sent to Lahore to help Fr. Pinheiro. We find him in 1604 spending some time with Jerome Xavier at Agra. " He has learnt Persian, writes the latter, and commenced Hindustani, the language of the country, and by his capacity and desire to learn he will soon master Arabic as well." He was back in Lahore in 1605. When Terry was in India, in 1616, Corsi was about 50 years oLJ. He is described as a Florentine, and, "if he were indeed what he seemed to be, a man of a severe life, and yet of a fair and affable disposition." Bernier, who lived on terms of close intimacy with our Fathers at Agra (1660 1665) refers doubtless to him in the following passage : I have learned of a Mahumetan, that was son to an officer of Jehan Guire, namely, that this King being one day in a debauche, called to him a certain religious man of Florence, whom he called Father A tech, as being a little fiery man ; and after he had commanded him to say all he could against the Law of Mahumet, and for the Law of Christ, in the presence of many knowing Mullahs, he would have made this terrible tryal of both those Laws, viz., that a great pit should be made, and a good fire in it, and that Father Atech with the Gospel under his arm, and one of those Mullahs wilh the Alcoran under his, should cast themselves both together into that fire, and that he would embrace the Law of him that would not burn. But that the sad countenance of the Mullahs altogether astonished, and the compassion he had of the Florentine Father, who accepted the condition, diverted him from it."

Under Jahangir and during Xavier s and Corsi's incumbency, several Mahomedan Princes were baptized. "This, year, Anno 1609, writes Sir Thomas Herbert, Currown, another of Jangheer s sons, 22 and other of his friends (to make his way the easier to the Crown) prevailed with Jangheer that his kinsmen Shaw Selym s Brother's sons might be Christened ; which accordingly was done in Agra ; the Jesuits that baptized the young Princes named them Philippo, Carlo and Uenrico; that jear also they baptized another Grandson of Eebar's, by the name of Don Edoard."

This painting was probably done for the Mughal emperor Jahangir (r.1605–1627) when he was still a prince living in the 1590s at Lahore, the northern capital of the Mughal empire, now in north-east Pakistan. The Jesuit Father Jerome Xavier, who was in Lahore at the same time, wrote in 1598 that the prince collected European paintings and prints and that he had seen the prince’s artists copying them. One of the images he saw them copying was a Descent from the Cross, a comparatively rare subject in Mughal painting. Although there is no evidence that this painting is precisely that mentioned by Jerome Xavier, it is of the same period. The composition is based on an engraving by Marcantonio Raimondi after a lost original by Raphael, and incorporates landscape details from other European sources.
The painting has been detached from a volume, otherwise intact and still at the V&A, known as the ‘Small Clive Album’. It is associated with Robert Clive, 1st Baron Clive of Plassey (1725–1774).

Akbar invited in 1580, a Jesuit mission to his court. This led to the establishment of a church and a Jesuit mission at Agra and to Dīn-i Ilāhī by Akbar around his own person. Members of the religion were handpicked by Akbar according to their devotion to him. Because the emperor styled himself a reformer that he wished to be acknowledged as a prophet also. The ambiguous use of formula prayers (common among the Ṣūfīs) such as Allāhu akbar, “God is most great,” or perhaps “God is Akbar,” hinted at a divine association as well. Akbar is recorded by various conflicting sources as having affirmed allegiance to Islām and as having broken with Islām. His religion was generally regarded by his contemporaries as a Muslim innovation or a heretical doctrine; only two sources from his own time—both hostile—accuse him of trying to found a new religion. The influence and appeal of the Dīn-i Ilāhī were limited and did not survive Akbar,

Akbar's church at Agra. Interesting 3 tiered hall. Original structure has been added on & its been a working church, ever since...

I also want to read the book

Yes the presence of Jesuits were fairly visible,the famous mariyam tomb near sikandra at Agra is also witness to that.