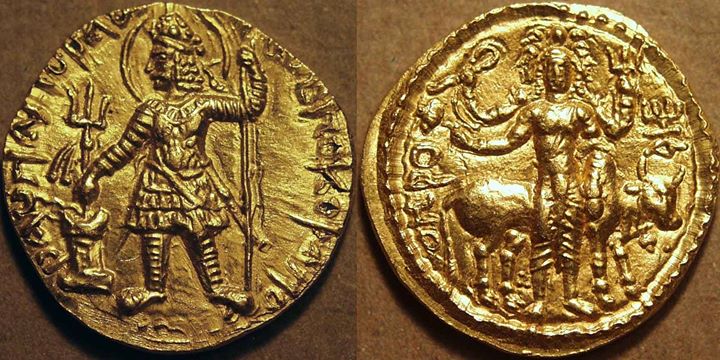 This coin has a number of unusual features. Oesho here has four arms and three heads, and the bull faces right rather than left. One of the objects in the deity's lower right hand is unusual for Shiva: a lotus.

Background:
Huvishka was succeeded by Vasudeva. The last date known for Huvishka is 62 (Kanishka era), while Vasudeva is known from inscriptions to have been ruling as early as year 68 and as late as year 98. Therefore Vasudeva must have taken the throne some time between years 62 and 68 (189 and 195 CE) and his reign must have ended some time soon after year 98 (225 CE). This dating is supported further by numismatic and other evidence that, at the end of his reign, Vasudeva came under military attack from the Sasanian emperor Ardashir I, who had ascended the throne in 224 and soon added to his empire the province of Balkh, which must at the time have been a Kushan domain.

It is possible that Vasudeva was the son (presumably of Huvishka) by a Hindu mother. This would account for his Hindu name and also for the fact that his coinage almost entirely eliminates the pantheon of deities featured on the coins of Kanishka and Huvishka. Other than a few very rare coins with Mao and Nana, Vasudeva's coins all feature Oesho on the reverse, who most see as a form of Shiva. Recall that Vima Kadphises also featured only Oesho on his coins, so Shaivism was not new to Kushan royalty. It is conceivable, however, that this religious break with the more catholic environment that held sway during the 65 years of Kanishka's and Huvishka's reigns may have created a less stable political environment. There may well have been nobles, particularly in the far western, presumably more heavily Iranian, provinces who chafed under the less tolerant environment and may even have welcomed (dare we speculate, aided and abetted?) the Sasanian invasion.

Vasudeva issued coins in gold (dinars and quarter dinars) and copper (single denomination declining in weight over time). The designs were the same, regardless of metal. The obverse design was a restoration of Kanishka's coinage: the king standing, sacrificing at a fire altar at left. One difference from Kanishka's coinage was that Vasudeva is shown holding a trident, presumably a homage to Shiva, instead of the spear or standard that Kanishka held. In addition, Vasudeva always shows himself nimbate, something Kanishka almost never did. A third difference crept in after some intial issues: Vasudeva added a trident above the fire altar. Perhaps this was to emphasize that Vasudeva's sacrifice was meant for Shiva, who is often symbolized by his trident. Recall that Vima Kadphises, who was a devotee of Shiva, placed only his trident on the reverse of his quarter dinar. The reverse design on Vasudeva's coinage clearly derives from Vima's bronze coinage, showing Shiva with his bull Nandi.