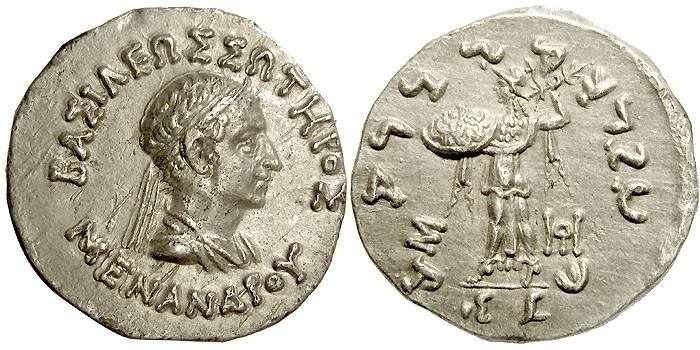 Digital Rare Book:
The Milindapanho, being dialogues between King Milinda and the Buddhist sage Nagasena
By Vilhelm Trenckner (1824-1891)
Published by Williams and Norgate, London - 1880
In Pali

The Milinda Panha is a work composed in Pali [an Indian dialect] that purports to be the record of a dialogue between the Buddhist monk Nagasena and the Greek King Milinda [Menander, see below]. Milinda asks a series of questions highlighting what seem to be anomalies and contradictions in Buddhist doctrine, to each of which Nagasena gives clear, even ingenious answers. The effectiveness of these answers is enhanced by the numerous similes and analogies that are included within them. Although there is no doubt that the two protagonists of the Milindapanha really existed and that they held discussions with each other, it is not a verbatim record of the discussions as such but a work of literature. Despite this, it may well have captured something of the personalities of the two men. Nagasena comes across as dignified but accessible, confident of his abilities to convince, intellectually alert, learned and witty. Milinda on the other hand, appears to be appears to be interested in Buddhism but by no means prepared to accept its tenets without good reasons. The Milindapanha is the most important book of Theravada Buddhist doctrine outside the Pali Tipitaka and is still widely studied. A translation of it is also included in the Chinese Tipitaka.