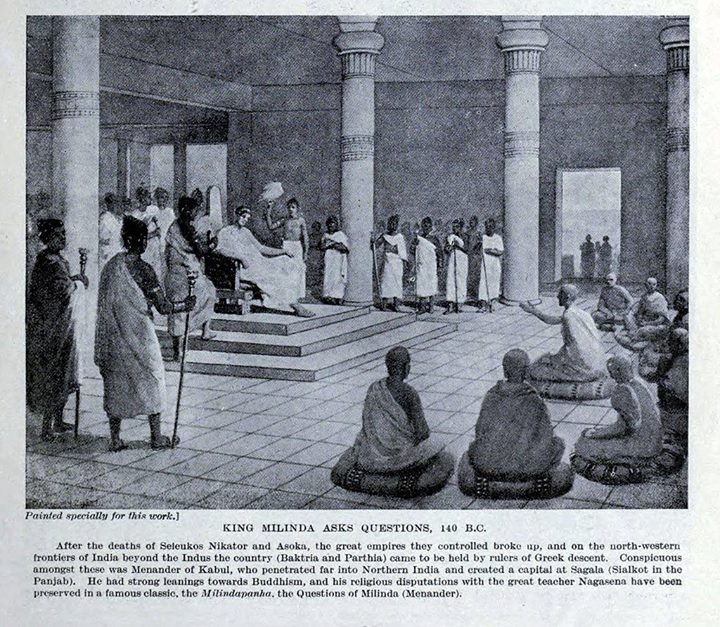 The Milinda Panha is an ancient and much venerated book of the Buddhists, indeed regarded so highly as to be included by the Burmese in the Pali Canon. In the Pali book it says that the conversations between King Milinda and Nŕgasena took place five hundred years after the Parinibbŕna of the Buddha. Mr. T.W. Rhys Davids, the translator of the Pali texts, regarded the Milinda Panha very highly. He said, “I venture to think that the Questions of King Milinda’ is undoubtedly the masterpiece of Indian prose; and indeed the best book of its class, from a literary point of view, that had been produced in any country.”

This is an excellent debate, between the highly sharp and intellectual, practically wise Greek King Milinda, and a wise and intelligent High monk, Nagasena who answers calmly and with honesty, the Kings knowledge concerning his insight and deep knowledge of the concepts and philosophy of Buddhist way, a great mature communication between these very noble minds read, enjoy.;-)

Much overlap between this Q&A and the King-priest discussions of Yajnavalkya & Janaka , and Pravahana Jaivali , from the Brihadanyaka. The pali Milinda Panha is a translation from sanskrit, much quoted by Kanchi's brahmin turned buddhist seer, Buddhaghosa of 5th CE. While "Milinda" is most likely the same Menander ( the geography of the text refers to his kingdom & times), nothing is known of Nagasena. Historian & Pali-experts, BC Law & Rhys David speculate from the Pali language used in the translation that the dialogue has been pieced together ( perhaps from different sources), at a later date & is definitely not a contemporary record of Menander's time.

Menander who converted to Buddhism :) but not much is known about nagasena the monk.pls throw some light on him too

@mayur..dude menander the greek king was patron of buddhism.He later converted to buddhist religion under nagasena & took the indianised named milinda.His treatise is known as milindpanha.This cannot be a jain monk.