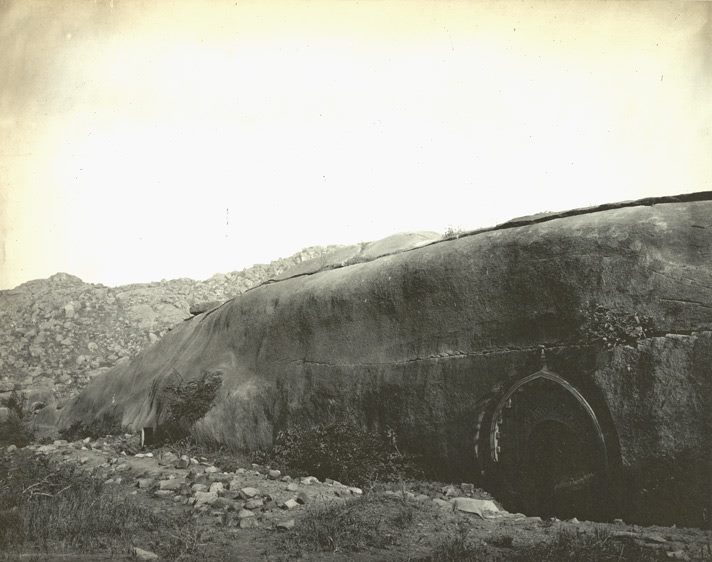 Photograph of the entrance to Lomas Rishi and Sudama caves taken by Joseph David Beglar in the 1870s. The excavation of these two caves has been both architecturally and epigraphically dated to around 250 BC, when the area was ruled by the Mauryan king, Asoka. Asoka was a Buddhist who ruled almost the whole of what we now call India in the third century BC. These caves were used by the AJIVIKAS, a sect which thrived under Asoka's policy of tolerance towards all faiths. The sect believed that life was entirely predetermined by destiny, and practiced asceticism at remote locations like these caves.

Both caves in this picture consist of two chambers, the first allowing worshippers to congregate in a large rectangular hall and the second providing a focus for their worship in a small, circular, domed chamber. This chamber probably held a small stupa-like construction at one point, however now stands empty. The Barabar caves provided a prototype for the larger Buddhist Chaitya halls that were built in Maharasthra such as Ajanta or Karli, and were very influential to the tradition of South Asian rock-cut architecture. They are also the setting for the opening of E.M. Forster's 'A Passage to India'. In this photograph we can see an oblique view of the entrance to Lomas Rishi Cave (in foreground), looking along the ridge towards the less adorned entrance to the Sudama Cave.