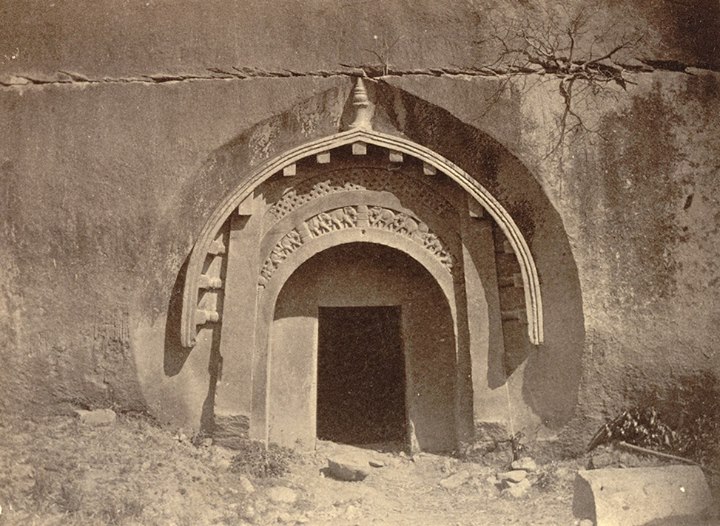 Photograph of the entrance to the Lomas Rishi cave taken by Alexander E. Caddy in 1895. The excavation of this cave has been dated both architecturally and epigraphically to around 250 BC, when the area was ruled by the Mauryan king, Asoka. Asoka was a Buddhist who ruled almost the whole of what we now call India in the third century BC. However these caves were used by the AJIVIKAS, a sect which were allowed to thrive under Asoka's policy of religious tolerance. The sect believed that life was totally predetermined by destiny and practiced asceticism at locations like these caves. Along with the other cave-temples in the Barabar hills, the Lomas Rishi cave, provided a prototype for the larger Buddhist Chaitya halls that are found in Maharasthra such as Ajanta or Karli and were very influential to the tradition of South Asian rock-cut architecture. The area is also the setting for the opening of E.M. Forster's 'A Passage to India'.

The Lomas Rishi cave consists of two chambers, the first allowing worshippers to congregate in a large rectangular hall, the second providing a focus for their worship in a small, circular, domed chamber. This chamber probably held a small stupa like construction at one point however now stands empty. Both chamber were carved entirely out of granite and have an arch-like faÃ§ade imitating contemporary timber architecture. The internal surface of the cave is highly polished. The sculptured doorway imitates a hut-like structure with sloping timber supports, curved eaves and a pot finial. A frieze of elephants proceeding towards stupa emblems is sculpted along the curved architrave.

Here is a copy of a beautiful horse I saw in the Lomas Rishi cave.

And the second horse in the same cave.

Ajivikas & ashoka ? Hmmm ..somewhere I read in DivyavAdana & asokavadana that the ajivikas infuriated ashoka when once lord buddha was portrayed in a weird manner.Hence he ordered their execution..Now these caves built for them by ashoka are confusing me a bit.though I'm not aware of the later happenings(may be they reached an agreement of peace).nevertheless awesome monuments & cave structures

Apologies for the threadjack. But the world needs to see the brilliant, if half-finished artwork that is found on the walls of these beautiful caves.

There is also a similar cave or channels of interconnected caves which goes beyond 60feet from the ground level. For more information, see http://en.wikipedia.org/wiki/Chandravalli.

Lomesh rishi will live 100 brahas life.... means 100 brahmas will come n go but rishi Lomesh never stays at a place n even never built a hut for himself saying life is very short ...

Of course, one wonders why the horse was never finished!