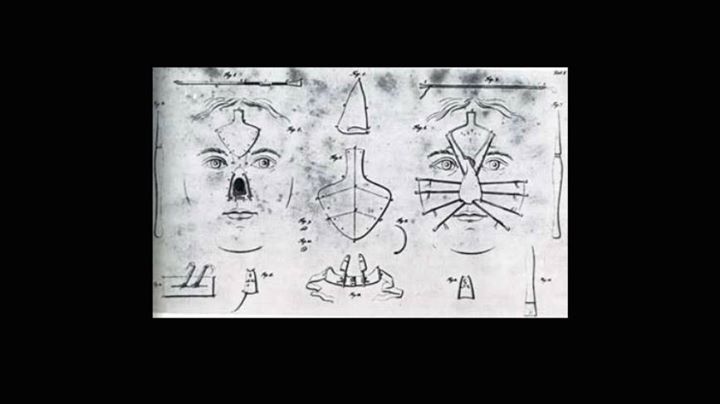 The Indian art and science of total nasal reconstruction comprise the first if not the most important chapter in the history of plastic surgery. Remarkably, centuries after their first use, the original Indian methods utilizing the cheek flap and median forehead flap for total rhinoplasty remain the basis for most reconstructive rhinoplastic procedures. The origins and diffusion of Indian rhinoplastic surgical procedures to the western world reveal the extent to which modern surgical procedures are indebted to their Indian forerunners.

Human anatomy, learned from cadaver dissection, filled the Sushruta Samhita, which also detailed operations for nasal reconstruction, cataract extraction, cesarean section, and even removal of stones from the bladder. Although the “Indian method” of nose reconstruction is now synonymous with the median forehead flap, the original Sushruta Samhita description of nasal reconstruction actually describes the cheek flap, which represents the first descrip­tion of the use of a pedicle flap.

In the fourth century A.D., Vagbhatta, an Indian physician, recounts with more detail than the Sushruta Samhita the technique of cheek-flap rhinoplasty. In his book, Ashtanga Hridaya, he credits the technique to Maharishi Atreya. The following seven verses from his treatise are illustrative:

Having cut a pattern on a leaf to the size of the nose to be repaired, cut similarly with the pattern on the cheek. Protect the skin and flesh near the nose so that it remains his part (i.e. flap pedicle).

Then suture the cheek with a sharp needle and cotton thread; and having incised the edge of the nasal opening turn in the outer skin.
Then unite the strap of skin from the cheek, suturing it to the nose with care. Lift it with two tubes so that he may breathe easily.

Then having moistened the wound with raw oil, sprinkle over it a paste of patanga and makhuka, and with other fine haemostatic powders.

Then having covered it with ghee and honey, keep a constant watch and subsequently treat the wound as required by the developments.

Finally trim off the excess of tissues near the nostril and suture it carefully. If short make it up again.

In Vagbhatta’s description, emphasis is placed on cutting the flap with accuracy, protecting the pedicle through which the flap obtains its blood supply, repair of the defect remaining after the flap is moved, and use of skin to provide lining. He reminds the surgeon to carefully approximate the cut edges of wound, and he recommends the use of topical hemostatic agents, intranasal splints, and adjustment of tissues in the postoperative period.

Makes a lot of sense. Do you know honey, ghee, coconut oil are powerful healers

Yes,and foreign surgeons have to gain expertise out of it.

Long time back I was reading a book in which when an English came back to India he found his friend's nose back. It had been cut by hid enemies.