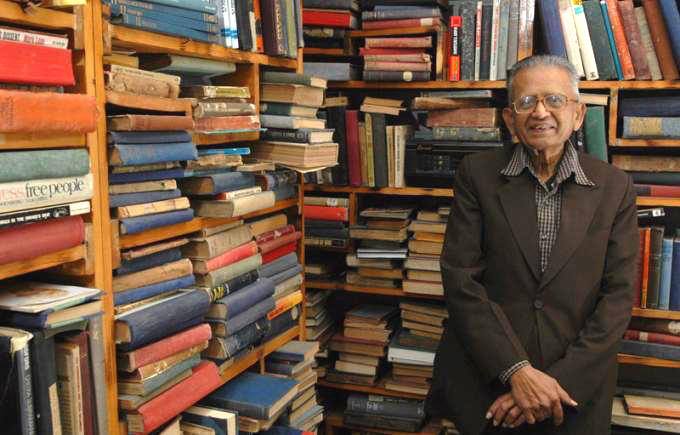 A self-effacing Bangalore bookseller surrounded by his past.

JUST OFF BRIGADE ROAD in central Bangalore is a quiet store, remarkably removed from the nearby bustle. This is Select Book Shop, a name familiar to many book lovers in the city. The store overflows with books old, new and rare, and the two men who will direct you to the treasures within are the owner KKS Murthy, and his son Sanjay.

On a drowsy Sunday afternoon, Murthy sat at his desk and took us through stories of the bookstore’s origins. White-haired and soft-spoken, his chain of memories was occasionally interrupted by customers, most of whom took a moment at the shop’s threshold to adjust their eyes to the relative darkness of the interior after the bright summer sunlight outside.

“My father chose to be a lawyer,” Murthy told us. At the same time, he was “an ardent book addict”, and Select Book Shop was born out of his passion for collecting books, most through auctions. In the 1940s, auctioneers in Bangalore would send word to Murthy’s father KBK Rao in Kurnool whenever books were being disposed of by American or British families leaving the city. “He would leave all his clients to their fate, and come away to Bangalore,” Murthy said. It would be left to his mother to explain to puzzled clients why their lawyer was missing again. “My mother had a lot of problems,” Murthy added with a laugh.

Murthy’s own memory of his house in Kurnool is of rooms with books stacked high—“arranged all around the ceiling”—and his enduring image of his father from those times is of him sitting atop a ladder in the library, lost in a book.

Select Book Shop’s first incarnation was on St Mark’s Road, in the garage of an Englishman whose name Murthy remembers only as Robertson. It has known several incarnations since—one in Malleswaram, and then along MG Road, behind the old Lakeview Milk Bar, shifting above the now demolished Thomas Cook office, before coming to rest in this quiet alleyway off Brigade Road.

As Murthy spoke, his soft voice was sometimes drowned out by the barking of dogs outside the shop. No sounds of traffic intrude, however—the short stretch between the shop and Brigade Road is somehow enough to cut out noise from that world completely. He chided us gently for being a few minutes late to interview him. “This morning, my wife had trouble breathing and we had to rush to the hospital,” he said. His son Sanjay was taking care of her, and he had come to the store so as not to disappoint us.

A friend arrived, inviting Murthy to lunch, and our conversation continued as we accompanied the two elderly gentlemen down Brigade Road. Murthy explained as we walked that he only joined his father’s book business after a full career of his own. “I was not a dealer in books earlier,” he explained. “I was a technocrat. I joined Hindustan Aeronautics and worked there for 18 years.” Murthy worked as a liaison between a French aeronautical agency and HAL, a job he quit to join his brother in America and work for Lockheed. He was offered a promotion, he said, but it would have required him to apply for American citizenship. He decided to leave and work for Simon & Schuster, where he recounts discovering that books with minor defects were consigned to the incinerator. Murthy managed to rescue many such condemned books and send them back to his father’s bookstore in Bangalore, and in the late 1970s he followed those books to join his father full-time.

A great, mature and learned man.

Great story. Want to buy a book from the store now.

Oh Mr Murthy, a great friend of mine.

It was heart warming to know the love for books..rgds aramki

Lovely. So glad to see one who cherishes culture. Bless him.

I know this place and the man. Bought several books here. The gentleman used to write postcards to inform about the availability of certain books. Great man. Thanks for the upload

Where is this book store ?

Kruttika Nadkarni check this out!

awesome!! let's go check it out!