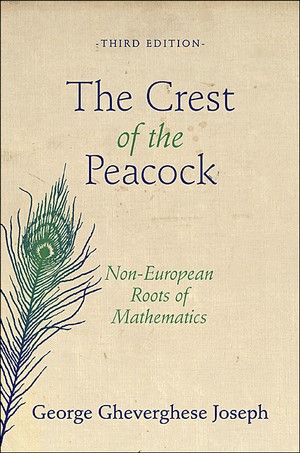 New Book:
The Crest of the Peacock: Non-European Roots of Mathematics
By George Gheverghese Joseph
Published by Princeton University Press - 2011

Like the crest of a peacock, like the gem on the head of a snake, so is mathematics at the head of all knowledge.
—Vedanga Jyotisa (c. 500 bc)

From the Ishango Bone of central Africa and the Inca quipu of South America to the dawn of modern mathematics, The Crest of the Peacock makes it clear that human beings everywhere have been capable of advanced and innovative mathematical thinking. George Gheverghese Joseph takes us on a breathtaking multicultural tour of the roots and shoots of non-European mathematics. He shows us the deep influence that the Egyptians and Babylonians had on the Greeks, the Arabs' major creative contributions, and the astounding range of successes of the great civilizations of India and China.

The book emphasizes the dialogue between civilizations, and further explores how mathematical ideas were transmitted from East to West. The book's scope is now even wider, incorporating recent findings on the history of mathematics in China, India, and early Islamic civilizations as well as Egypt and Mesopotamia. With more detailed coverage of proto-mathematics and the origins of trigonometry and infinity in the East, The Crest of the Peacock further illuminates the global history of mathematics.