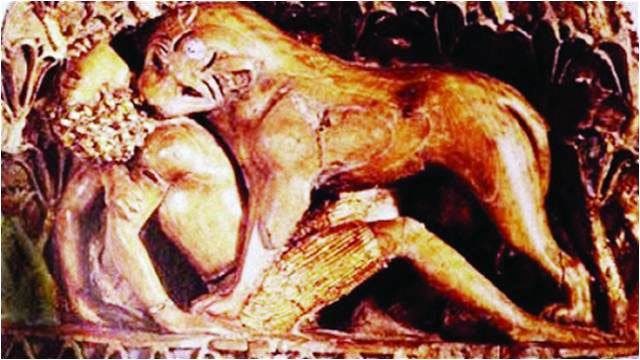 Article:
The grammar of lions
By Salma Mahmud
The Friday Times - 2013

The aplomb with which the great grammarian Panini met his gory death at the hands of a ferocious lion is a lesson to us all. That ancient collection of animal fables, the Panchatantra, c. 3rd century BC, mentions his death as an accepted fact.

The 6th century BC was an eventful era. It was the time when Panini composed the oldest available grammar of any language (Sanskrit in this case) and when the Neo-Babylonian Empire in the Near East was overthrown by Cyrus, who founded the Persian Empire in its place. It was in this very century that Zoroaster founded Zoroastrianism. In India the Buddha and Mahavira founded Buddhism and Jainism respectively, and the occupation of the Punjab was completed by the Persian King Vistaspa, making it a part of the greater Gandharan Empire, while in faraway China Confucianism and Taoism flourished.

Panini was born in Salatura, a small town identified with the ancient and original Lahur (not to be confused with Lahore, Punjab's capital) situated on the banks of the River Indus. Alexander the Great is said to have passed through this area when he arrived in the Potohar district, and it was a part of the Hindu Shahiya kingdom of Ohind. Sir Alexander Cunningham, the founder of the Archeological Survey of India, and a renowned expert on Buddhist stupas, identified Salatura as Panini's birthplace. Scholars disagree to a certain extent as to whether to call it Salatura or Lahur, but Panini states firmly at the beginning of Ashtadhyayi that he was born in Salatura, an area that has always produced warriors of the finest order.

He had one known sibling, Pingala, who was a brilliant mathematician and a master of prosody. Believe it or not, he was killed by a crocodile! No one can say that the two brilliant sons of Shalanka and his wife Dakshi were not disaster-prone.

Panini's Ashtadhyayi formulated 3,959 rules of Classical Sanskrit morphology, syntax and semantics, and in its 8 chapters it was the grammatical branch of the Vedanga, the auxiliary scholarly branch of Vedic religion. It is the earliest known work on descriptive linguistics, and together with the work of his immediate predecesors, stands at the beginning of the history of linguistics itself. His theory of morphological analysis was more advanced than any equivalent Western theory before the mid 20th century. His analysis of noun compounds still forms the basis of modern linguistic theories of compounding, which have borrowed certain key Sanskrit terms from him.

I'm proud of the legacy of ancient India left by greatmen like Panini,ashwagosha,dandin,sudrak,kalidasa,aryabhat,varahmihir,Nagarjuna,vishakadatta,sushrata & the likes.with men like these,we could compete in the intellectual era of those times.Indeed men like these are born only once in an aeon

Wow.. I did not know the story Thx

To think that the land of Panini is today a hotbed of fundamentalism is partly because the memory of their history has been erased. Such intellectual giants flowered because freedom of thought was not restricted unlike today.

I believe the our poor stand in for Paniniji once belong to King Tutankhamen! A great story to a tragic end.

On Panini, the genius V.S. Agrawala did a couple of doctorates & left us his book , " India as known to Panini". Worth a dekho ( http://journals.cambridge.org/action/displayAbstract?fromPage=online&aid=5738812 ). Those not familiar with Agrawala's works ( including his landmark "Vedic Maths" book), may find this note useful ( http://ignca.nic.in/PDF_data/vasudeva_saran_agrawala.pdf ).