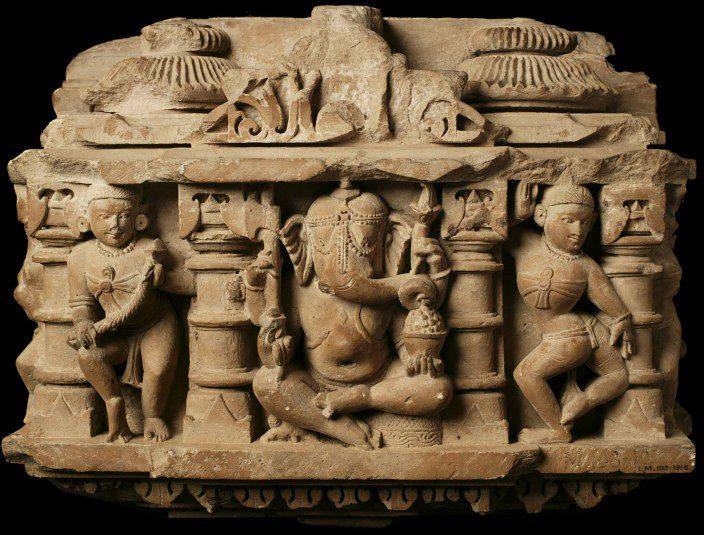 Ganesha is worshipped by most Jainas, for whom he appears to have taken over certain functions of Kubera. Jaina connections with the trading community support the idea that Jainism took up the worship of Ganesha as a result of commercial connections.

The Jaina canonical literature does not mention the cult of Ganesha.The earliest literary reference to Ganesha in Jainism is in Abhidhānacitāmani of Hemachandra (c.a. third quarter of twelfth century). It refers to several appellations of Ganesha such as Heramba, Ganavigneṣa and Vinayaka and visualizes him as elephant headed, pot-bellied, bearing an axe and riding a mouse.

According to the Swetambara Jaina work, Ācāradinakara of Vardhamānasūri (c. 1412 CE), Ganapati is propitiated even by the gods to get desirable things. It is further mentioned that He is worshipped at the beginning of every auspicious ceremony and new project. This practice is still very common in the Swetambara community. The text provides procedures for the installation of Ganapati images.

The popularity is however not met with in Digambara texts. Excepting two medieval figures carved at Udayagiri and Khandagiri caves, Orissa and an early figure at Mathura, his representations are not found in any Digambara sites.

The earliest known Jaina Ganesha statue at Mathura with Jaina Yakshi Ambika(the Jaina name for Gauri) dates to about the 9th Century CE. Images of Ganesha appear in the Jaina temples of Rajasthan and Gujarat. In the tenth-century Mahavir at Ghanerav and eleventh-century temple in Osian, Rajasthan; Ganesha images are found.

Carved in high relief on the front with the four-armed Ganesha seated holding an axe, tusk, flower bud and bowl of butter balls. Flanking him are two male dancers. On the left face is the four-armed vidhyadevi, Mahamanasi seated in lalitasana pose on a lion, holding a trisula, lotus flower bud and pot (fourth arm missing). On the right face is a two armed goddess, seated and holding a mirror and a comb. Beside a dancing man holds a cobra by the neck. These figures are separated by ringed pillars with square foliated capitals under an entablature with a scrolled cresting and an amalaka finial.

Aditi Dey there you go.

The influence of Hinduism is dominant inspite of a different path chosen by the Jains in general.