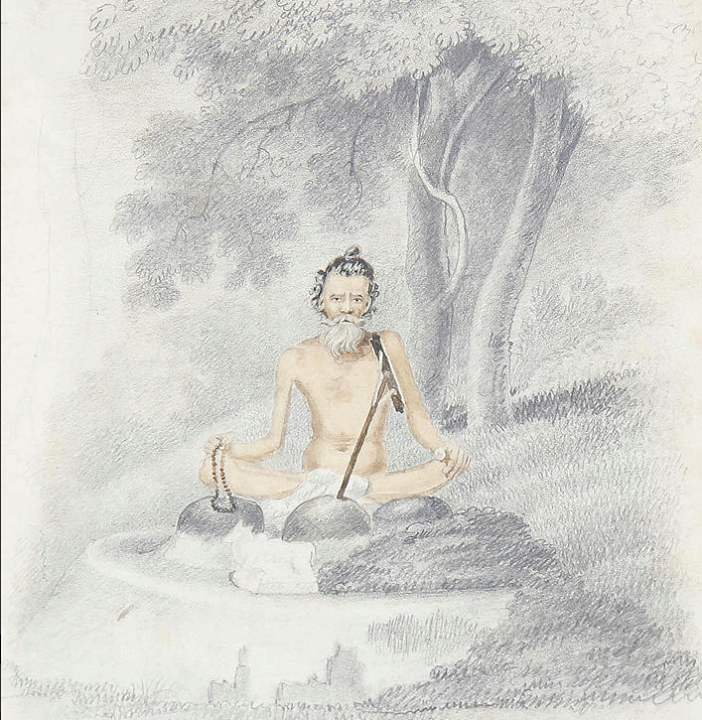 As is often the case with Sanskrit writers, little is known for sure about Bhartrihari, though he is one of the great lyric poets of India, still widely read and quoted. He may have been the Buddhist grammarian mentioned by the Chinese traveller I-tsing, who visited India in the 7th century AD, but the attribution is unclear, and Bhartrihari appears in his work more a worshipper of Shiva. Tradition makes him a king of Ujjain in the 1st century BC, who abdicated in favour of his brother over disgust at his queen's infidelities. Bhartrihari has certainly some unflattering things to say about women, but does not appear the pampered ruler so much a shrewd and needy brahmin.

There are also stories of his vacillating character, drawn equally to pleasure and spiritual matters, and so continually moving between court and Buddhist cloisters, but again they are no more than anecdotes. Bhartrihari's works combine scraps of writings by other poets, including Kalidasa, but is this plagiarism by Bhartrihari or later interpolation? Controversy rages and nothing is settled. Sanskrit literature is notorious for being little interested in history, and India was only occasionally united under Indian rulers: the Mauryans, the Guptas and the Marathas.

Bhartrihari wrote three collections or shatakas of poems. The Srngara gives us little pictures of love and love-making. The Vairagya describes a gradual withdrawal from worldly matters, and the Niti deals with ethical conduct. Topics not very conducive to poetry, perhaps, yet Bhartrihari shows Sanskrit at its best: profound, pithy and beautifully clear. Each of the shatakahs contains one hundred poems, generally just of four lines, sometimes two. But the content of each poem may be as wide as that of fourteen lines in the English sonnet, and can print out in more when all nuances are translated. The poems are entertaining, observant, wry and often deeply reflective. Kalidasa is the greater artist, but epic poetry is not dramatic in a western sense: stereotyped characters, unlikely plots, long digressions that hold up the story, verbal cleverness, and a jewelled and increasingly elaborate style, with sentences that sometime stretch over several pages. Bhartrihari's pieces are sharply-cut cameos, brilliant poems in miniature, to which the only equivalent in European languages may be the scattered fragments of the Greek Anthology.

Being an inflected and quantitative language, Sanskrit can convey the sense in an unusually compact, clear and profound manner. Its thought and literature has had a deep influence on European artists, though their languages (and even the ancient Greek) lacks the sound effects that Sanskrit can deploy. Over 70 different measures are found in its classical poetry, which also employs heavily-jewelled phrases, stringing long words together (samasa). The cost comes in the large vocabulary (Monier-Williams lists over 180,000 words), and a grammar so taxing that even accomplished writers can make mistakes. Style in early literature — Mahabharata (the world's longest poem with over 100,000 verses), the Ramayana and largely in both Kalidasa and Bhartrihari — is straightforward, but later work is more ornate: increasing use of samasa, description piled on description and erudite word-play. Syntax can also be very free, when the whole verse has to be read before the sense starts settling into place. Add that to its classical nature, with little of an individual outlook from its practitioners, and the result is a literature splendid but remote from twentieth century concerns. Why read it? Because of its beauty, its extraordinary sensitivity to the natural world, and human nature in particular, and its depiction of sensual love that goes beyond what is possible in English while still remaining poetry. The essence of love, kama, was consciously studied by Sanskrit poets, but finds different expression in its leading exponents: Bharavi, Bhatti, Kumaradasa, Magha, Dandin, Bhavabhuti, Bilhana, Sriharsa and Jayadeva.

Reading Bhartrihari in the original Sanskrit takes some effort, but for those happy with translations there are many sites, some with very acceptable renderings. General books on Sanskrit poetry include A. B. Keith's A History of Sanskrit Literature (1928/1993), A.K. Warder's Indian Kavya Literature (1972), B.S. Miller et al's Columbia Book of Indian Poetry and J. Brough's Love Poems from the Sanskrit (1997). D. Sahu's Three Shatakas of Bhartrihari (2004) provides the full Sanskrit text in Negari and transliteration, plus an expanded English translation, and BS Miller's Bhartrihari (1967) is much recommended. Swami Madhavananda's translation of Vairagya also has the devangari text. To properly appreciate Bhartrihari, however, you will probably need older scholarly works by Kale Moreshwar Ramchandra, Gopinath Purohit and N.S. Singh . Books are relatively cheap in India, and can be ordered safely through abebooks or alibris: there are also many specialist bookshops. As always, The New Princeton Encyclopedia of Poetry and Poetics (1993) provides useful summaries and A. L. Basham's The Wonder that was India (1954/2004) is a readable account of pre-Islamic India. Jeannine Auboyer's more detailed La Vie Quotidienne dans l'Inde Ancienne exists in French and Spanish versions only.

Thanks for sharing sir..