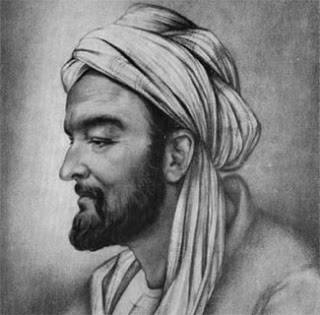 Abu Rihan Muhammad bin Ahmad, Alberuni as his compatriots called him was born about A.D. 973, in the territory of modern Khiva, then called Khwarizm. He came to as Ghazni as a prisoner of war (Sachau:viii). He was an astronomer, geometrician, historian and logician. He was so studious, his earliest biographer tells us "he never had a pen out of his hand, nor his eye ever off a book, and his thoughts were ever directed to his studies, with the exception of two days in the year". He was beyond comparison, superior to every man of his time in the art of composition, in scholarlike accomplishments, and in the knowledge of geometry and philosophy, and above all he had "most rigid regard for truth." (Elliot and Dowson:2) He accompanied Mahmud of Ghazni to India and stayed there for many years, chiefly, in all probability in the Punjab, studied the Sanskrit language and translated into it some works from the Arabic, and translated from it two treatises into Arabic (Elliot and Dowson:5). Sachau, translator of Alberuni's Indica believes Alberuni "composed about twenty books on India (Sachau:xxvii), both translations and original compositions, and a number of tales and legends, mostly derived from the ancient lore of Eran and India." He was indeed a prolific writer and his works are stated to have exceeded a camel-load. (Elliot and Dowson:3).

Let me also make another observation about Alberuni. He regards Hindus as excellent philosophers and he felt strong inclination towards Hindu philosophy but still he was a Muslim and at times does not fail to point out the superiority of Islam over Brahmanic India. He attacks Arabs but not Islam (Sachau:185). He wrote for those Muslims who "want to converse with the Hindus, and to discuss with them the questions of religion, science, or literature, on the very basis of their own civilization." (Sachau:xvii, xix, xxiii) While discussing astronomical calculations regarding the order of the planets, their distances and sizes, he reminds the reader the purpose of his book once again --- to discuss subjects "which either are noteworthy for their strangeness, or which are unknown among our own people (the Muslims) and our (the Muslim) countries." (Sachau:80).

The most revered scholar of his time who learned Sanskrit and studied all the available texts. But his works are not original. They are taken from secondary sources.

Asiatic Society in Calcutta has a copy of his manuscript book.

Sorry but this is not the face of Abu Rihan Muhammad bin Ahmad (Alberuni) The photo show the face of the Iranian physician and philosopher Avicenna (Ibn Sina) who profoundly influenced medieval Islamic philosophy, while his synthesis of ancient Greek and theology also had a major influence on the Western thought, especially that of the medieval Christian philosophers. Plus, how come there is no mention that Abu Rihan Muhammad bin Ahmad (Alberuni) was an Iranian Persian Muslim ! It must be remind Khwarezm was part of the Persian empire, known at this time as Huvarazmish. http://www.philosophers.co.uk/avicenna-ibn-sina.html

Zari Didi: Point well taken. But you will understand all these are modern pictorial representations of historical personalities who lived over thousand years ago. Hence we do not have real images of them.