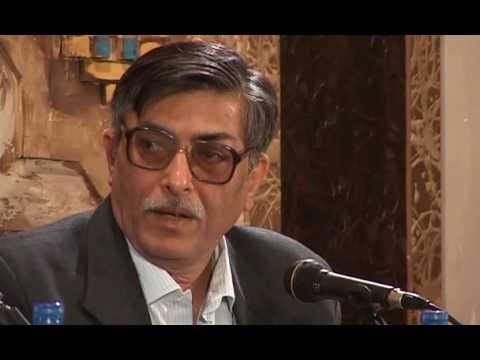 Interview:
"Indian mathematics is practical whereas the European is metaphysical"

C K Raju has been arguing passionately through several lectures and books about the uniqueness of ancient Indian mathematics and how it influenced the rest of the world. He says what is taught as standard modern mathematics today, is based on theological positions taken by the Church after the Crusades.Shivanand Kanavi conversed with Raju on the results of his research in the history and philosophy of mathematics.

Shivanand: Dr Raju welcome to peepul ke neeche conversation. Having looked at some of your writings, I see that you have researched deeply into the mathematical tradition of India as well as that of Persia, Arabia and Europe. Could you give us an overview of exchanges between India and West Asia in the field of mathematics?

Raju: As I have stated in the book (Is Science Western in Origin?-C K Raju), the process of exchange with Arabs started with Barmakids (barmak from pramukh, Persian-Buddhists who were wazirs to Abbasid Khalifas--Ed), this was around 8th century CE, after the conquest of Persia by the Arabs. Besides the spread of Islam in Persia, Persian customs spread to the Arabs. There was a tradition in Persia of importing knowledge from all over the world. It was based on a philosophy which regarded knowledge itself as virtue, like the Socratic philosophy. So, to make people virtuous you gather knowledge from all corners of the world. It was begun by Khusrow Noshirvan in the 6th century. At that time Justinian closed all the schools of philosophy in the Roman empire and many philosophers took refuge in the court of Noshirvan. According to the Shahnama [of Firdausi] his wazir came to India and took chess, Panchatantra etc. back to Persia. There was also an astronomical tradition in Jundishapur (Gundeshapur) in Persia. This astronomy also traveled from India. Which is interesting, because Khusrow's court already had the most knowledgeable people in the Roman empire and if the Almagest (Almagest is the Latin form of the Arabic name al-kitabu-l-mijisti, (The Great Book) of a mathematical and astronomical treatise proposing the complex motions of the stars and planetary paths, originally written in Greek by Ptolemy of Alexandria, Egypt, written in the 2nd century. The Almagest is the most important source of information on ancient Greek astronomy-Ed) or any other advanced astronomical text existed at that time then it would have been similarly collected and translated, but we do not hear about it. On the contrary, the Almagest itself starts off by addressing an unknown "Cyrus". So it was probably constructed in Persia. Certainly, Greek knowledge was translated into Persian and later into Arabic. But, so far as astronomy is concerned we know that the very fact that first it went [from India] to Persia and then Baghdad shows that Greek knowledge at that point did not compare in any way with the present-day versions of Ptolemy's Almagest. There was also a strong tradition of neo-Platonism which came through texts in Greek language [though probably it originated in Egypt]. This was called the "theology of Aristotle", and that was the primary extent of "Greek" knowledge at that time. There was no Greek knowledge available from Byzantium at that time since all the schools of philosophy there had been closed. [We also know that Arabic knowledge travelled in the other direction, to Greek texts.] The proof is that Panchatantra is translated from Sanskrit to Pahlavi (and you find its reference in Firdausi's Shahnama) and from Pahlavi it was translated into Arabic and then from Arabic to Greek. Among the Arabs it became the basis of a movement -Ikhwan as- Safa (the Brethren of Purity); so we know the route that knowledge took from India to Greek texts, and it also traveled directly [as in Ashoka's time when Indian texts and medicinal plants went to Alexandria]. The process really took off with Bayt al hikma (The House of Wisdom at Baghdad) which was linked to Islamic rational theology which valued knowledge as a virtue. It was closely related to aql-i-kalaam, which meant Allah has given you aql and one must apply that aql in order to interpret the Koran.

Seen after a long time.

Mr Raju questions something that nobody is claiming "Is Science western in origin" and then attempts to answer it in a parochial style. I am not sure what purpose is served by this style of argumentative writing where you bring in an "us versus them" angle with the very title of your book! If you genuinely believe Indian science is underestimated or mis-appraised, please write a scholarly unbiased history of the same (in the tradition of say Daniel Boorstin's Discoverers) and let people judge the same! Instead you see partisan attempts which preclude themselves from being taken seriously! While it is true that Indian math has greatly influenced the western tradition, it is also true that Hellenic influences have influenced Indian math. Don't look down upon the western tradition just because it isn't your tradition! Ofcourse it is natural that the Arab mathematicians knew more than Pythagoras did but that's because there is a gulf of 1500 years separating them! We all stand on the shoulders of giants. Also the West's contribution to science and math post 1100 or so has been immense and very inordinate when weighed against its relative geographic size! Something that men like Raju aren't probably comfortable acknowledging.

And I am sorry to say that Mr Raju's choice of phrases - especially "I don't know what their contributions were in science." is quite flippant and lacking humility.

Also it is quite silly when he claims that Indian mathematical tradition is "practical" while the European tradition is "metaphysical". It's laughable. Especially given that Europe (that too a handful of Western European countries no larger than a large Indian province) have pioneered in the application of mathematics in all walks of life and powered practical technological progress in a big big way over the past 1000 years. In fact Italy was a pioneer in leveraging Hindu-arab numerals in the most practical way by innovating in the field of accounting and book-keeping as early as the 13th century.

I think the problem with a lot of these "nationalist" amateur historians is that they have been deeply deeply hurt by some admittedly condescending and biased histories authored in the Victorian era and they are still smarting under the "insults" on the Orient heaped in those dusty books over a 100 years ago. And now in the 21st century, it is the turn of these guys to turn on the West and get it off their back by writing biased, highly selective polemics. It's a bit like the "dalit literature" we see in modern India where the dalits seek revenge on thousands of years of perceived oppression by blasting the brahmins and Hinduism in general. The wheel has turned a full circle. What's often forgotten in this process of intellectual revenge is that the West has moved on a LOT since the days of Victorian amateur scholarship and it is just silly to still nurse grudges that originated over a 100 years ago.

"A sutra has to be terse to make it easy to remember. It is a cultural matter [in the oral tradition] that here we are dealing with minds of human beings and hence the communication should be from one mind to another and not filtered through a derivation on a dead parchment where it is liable to be misunderstood. Right or wrong that seemed to have been the cultural tradition and an oral tradition. After all even Vedas are not written down. That is not a critical issue dealing with validity but a pedagogical matter." I find this a rather desperate attempt to defend the oral tradition - a tradition which is precisely the reason why Indian science and philosophy are so poorly understood in the west. Because they weren't written down well and historical dating is often quite impossible for several texts! I think this is an abominable aspect of our tradition that the intelligentsia in this country weren't big fans of writing. And I don't think this aspect of our tradition needs defence! It simply isn't worth defending.

Good discussion! I have to interact my friend Raju over this.