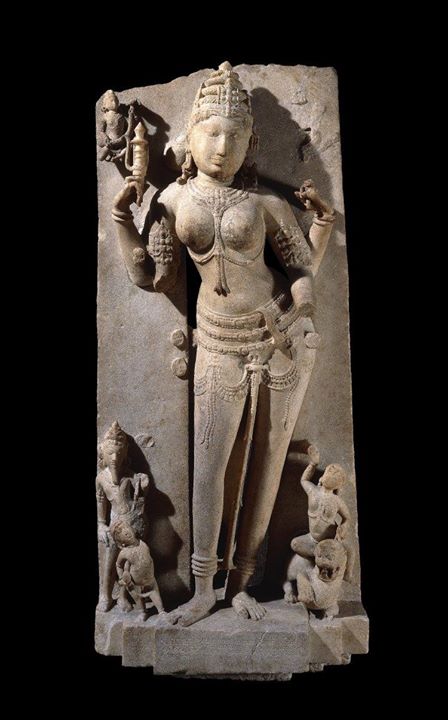 Image:
Standing figure of the Jaina yaks ini Ambikā carved in a coarse white marble. The goddess, originally four-armed, is carved in high relief against the plain ground of the slab; the base has been given offsets and is inscribed. The goddess wears a tiered crown of the beehive (karaṇḍa) type with her long hair tied into a small bun on one side. Two arms of the goddess have been broken away; in the remaining arms, she holds an elephant goad (aṅkuśa) and what seems to be the bottom of a noose or the stalk of a plant. On one of the stepped faces of the base is a small incised figure of a kneeling female donor with a inscribed label above.

Inscription Translation:
Auṃ. Vararuci, who is intent on the dharma of the Candranagarī and Vidyādharī [branches of the Jain religion] of srīmad Bhoja the king, the apsaras [as it were] for the easy removal [of ignorance? by...?], that Vararuci, having first fashioned Vāgdevī the mother [and] afterwards a triad of Jinas, made this beautiful image of Ambā, ever abundant in fruit. Blessings! It was executed by Maṇathala, son of the sūtradhāra Sahira. It was written by Śivadeva the proficient. Year 1091.

Inscription Comment:
The inscription records the making of the image of Ambā by Vararuci after he had made a goddess of speech (Vāgdevī ) and three Jinas. This Vararuci may be identified as Dhanapāla, the author who enjoyed a prominent place in the court of king Bhoja.