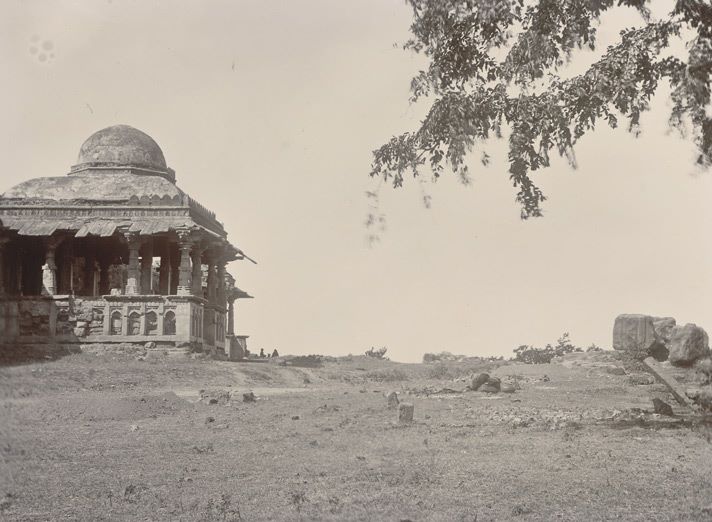 Photograph of the Lat Masjid, at Dhar, Madhya Pradesh, taken by an unknown photographer in c.1902. Dhar in the Malwa region of central India had long periods of Hindu and Muslim rule. It was once the capital of the Hindu Paramara dynasty, known for their patronage of the arts and learning, from the 9th to the 13th century. It was conquered by the Delhi Sultanate in 1305 and then became part of the independent province of the Sultans of Malwa when Dilawar Khan broke away in 1401. In the 1530s Dhar passed to the Gujarat Sultanate. Built in 1405 by Dilawar Khan, the first Sultan of Malwa, the mosque takes its name from an iron pillar (lat) which lies outside. The pillar is believed to have been erected by a Paramara ruler to commemorate a military victory, and was broken into pieces when Sultan Bahadur of Gujarat (ruled 1526-37) attempted to dig it up. The mosque was built from the spolis of temples, including carved brackets and pillars which are used in the interior colonnades. Consequently it has a hybrid architectural character. This is shown in the design of the pavilion at left which forms part of the mosque.

Some historian call this type of architecture as Indo- Islamic architec. But why? They have not any contribution in art & architecture, only demolished with their barbaric attitude.