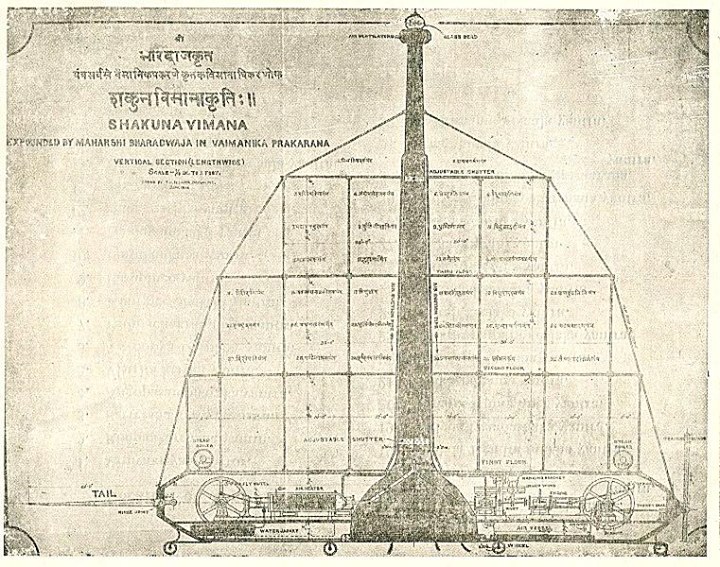 At the Indian Science Congress on Sunday, at a special session called “Vedic Science through Sanskrit’’, a former pilot, Captain Anand J Bodas, claimed that aircraft technology existed in India thousands of years before the Wright brothers’ first flight in 1903. To substantiate his claim that aeronautical engineering in India dates back to Vedic times, Bodas referred to a book, Vyamanika Shastra, that claims to document ancient sage Maharishi Bharadwaja’s musings on aviation technology.

What was not mentioned, however, was that exactly 40 years ago, a group of five young Indian scientists from the aeronautical engineering and mechnical engineering departments of the Indian Institute of Science in Bangalore had debunked such claims after conducting a thorough study.

The group, led by H S Mukunda, a now retired professor of aerospace engineering from IISc, had found that none of the technologies documented in the Vymanika Shashtra would allow an object to fly. They also found that the Vyamanika Shastra was based on a figment of imagination of a man who lived in the 20th century, and not the ancient sage Maharishi Bharadwaja.

In a paper titled “Critical Study of the Work Vyamanika Shastra’’, published in the journal Scientific Opinion in 1974, Mukunda, S M Deshpande, H R Nagendra, A Prabhu and S P Govindaraju said: “The planes described are at the best poor concoctions rather than expressions of something real. None of the planes has properties or capabilities of being flown; the geometries are unimaginably horrendous from the point of view of flying; and the principles of propulsion make then resist rather than assist flying.”

Following futile attempts to establish the Vedic origins of the claims in the Vymanika Shastra , the scientists found that the book was in fact “brought into existence sometime between 1900 and 1922 by Pandit Subbaraya Shastry’’, an interpreter of Sanskrit shlokas whose work was documented by an aide before his death in 1944 as the Vyamanika Shastra.

The work, according to the paper by the IISc scientists, was discovered in 1951 by A M Joyser, the founder of an International Academy of Sanskrit Research at Mysore, who published it.

While the science of aeronautics requires understanding of “aerodynamics, aeronautical structures, propulsive devices, materials, and metallurgy’’, the Vyamanika Shashtra paid “little or no emphasis on aerodynamics’’, said the IISc paper. “It is worth pointing out that that the history of aeronautics (western) in regard to production of heavier- than-air craft is studded with initial failures, significantly traceable to a non-understanding of aerodynamics,’’ it said.

Now we have a Movie on this too.. #Hawaizaada

Have they tried constructing & flying with the documented technologies before jumping to conclusions ? Any road side professor has a theory today against the Vedic explanations & hence not to be taken seriously. As if the rishis & munis had no other work but to write some imaginary stories for review by these psychos passing off as professors.

Did the original book of sage bharadwaja have the drawings or illustrations. What's the harm in researching? We are the only country who condemn our fore fathers that too joining hands with foreigners.

a false proponga against the ancient wisdom of hindus.please study the valmiki ramayan which mentions in detail pushpak viman and journies in air till peru.

Wow the above comments are facinating and worrisome ... IISC is a world class science institute and the commentators will do well to get to know and take pride in the science actually being pursued by Indians today, science that has sent a space craft to Mars besides much else Thank you RBSI for sharing.

I am from Peru, very interesting, can you give me the part where that is mention please? Jay Sita Ram!

so what about the documented case of Shivkar Bapuji Talpade, who made flight 8 years before the wright brothers...?

also the machine devised by Shivkar Bapuji Talpade, used solar and mercury power, the ruiments of aerodynamics was not an issue in those days, Flight to cover vast distances was made without any fossil fuel emmissions...! the flight was witnessed by a famous Indian judge and a nationalist, Mahadeva Govin-da Ranade and H H Sayaji Rao Gaekwad, respectively .. as well as members of the British ruling forces...! need i say more as to what happened in the next coming years to Shivkar Bapuji Talpade .... Needless to say the machine was eventually shipped to Britain and its history and journey here have been erased...! But Hindustan Aeronautics Limited has preserved documents relating to the experiment....! clear documented proof that it was studied and the details of the experiments for the Mercruy solar powered engines...! This study was what the Germans came to hear of and discussed with the Tibetan Monks as they held all the original copies for these ancient texts...! Again History has the evidence of Germany's expertise into this technology... Known as the Foo Fighters and then the case of the German Bell...!

but the flight instruction manuels are correct

one thing about those mercury engines,,wouldn't burning mercury create some type of radiation?

there is one writting that holds a bit of fascination for me,its a set of instructions on how to build a heater in a vimana that will keep people warm,,as you read the text you realise this is unlike any heater you have ever seen of even heard of,one part of the instructions say to place heating crystal number 305 in a certain spot on the heater..now while that is interesting its not my point in this piece,,,there were 304 other heating crystals and God knows how many after 305.today we see crystals as pretty and they have viberations and so on,,but can we take a crystal and grade it? divide it down to its most useful parts,then have a function for and a use for the end product,just think of all the different types of devices they had that used all those crystals,,and those were just the crystals they used in constructing a heater,what else did crystals go into making?.theres a rock wall in Texas USA that is man made,7 storys high and the stones in it are man made using green tourmalline as a major ingrediant.since green tourmalline is found in quartz what did they do with all the quartz it was in?they crushed it up and made the mortar for the wall with it,and after at least 25,000 yrs its still water tight,still think we are dealing with an advanced civilisation?we don't know the tinest fraction of what they did

we marvel at the fragments and the pieces that have somehow slipped past the years of time to come to us in our now time.and we marvel,,it must have been a place of unbelievable wonders

Even if considered a myth . . . consider the time frame when intricacies of design and project management that the document purports to hold and that too in Sanskrit was published. IITians, IIScians are known to embrace all things 'civilized' to be accepted in the global village.

First aid manual for india by British govt in 1901

First of all an August scientific body has debunked this whole book and the impracticality of such crafts ever flying. Even if such a book was authentic, it would likely be in the same genre as science fiction. At what point do we Indians start believing in reality. If not you will be taken for a ride by yet another Ramar Pillai and his herbal petrol BS.

thanks for this info

Vimanas were not powered by mundane laws such as gravity they fly due to the powers of mystic yogis or mind over matter, such Vedic sciences were lost thousands of years ago

Levitation has been proved beyond doubt. Calculations will show it is not possible! The existence of the Ram Setu ( Adam's bridge) , Dwarka and many more things have been doubted in the past but they have been found ! So we can't be so sure -can we?

Okay, so Peru has this mountain, but where does the Shloka above say it? There could be thousands of mountains in India that match the description.

To belittle professors of India's best science institute as a 'road side professor' is a pedestrian comment, to say the least.

Kulveer ji if you know sanskrit then you can understand the meaning.if not then please do some homework before confusing others as you are yourself confused.

Where's the Adam's bridge? Can you walk across to Sri Lanka? I am intrigued if you are talking about the under-water fold mountains under the Palk Strait, which are quite normal anyway...

How did scientists found that book was come in existennce between 1900 or 1922? Might be scientist dont understand the book or might be they are paid by other party to give credit to wright brothers, but it doesnt approve that Shivkar Talpade didnt invent Aircraft!! Who is T A johnson ? What is his authenticity???

Vimanas dosnt obey law gravity, as prabhupada says its Air controling not gravity. Might be it exists but we are unaware of these things!!

Its very good that the scriptures related to such amazingly potent higher science were destroyed by the will of the Lord before Kaliyuga. Otherwise, the people in Kaliyuga would have done havocs using the same.

To belittle the great works of scientifically advanced rishis & munis as 'poor concoctions' without actually testing it -- is merely imbecility.

I sometimes wonder at the desperation of my countrymen which makes them blindly believe anything that says our ancestors are great! Ther are many great achievements that are real -in philosophy, poetry, etc. but they harp on the supposed greatness in "sciences" simply beause Macauley succeeded in making them accept that western science is true knowledge. So they want to believe in all humbug about our supposed achievements in science while completely ignoring other aspects of the culture. It is surprising none of these believers are asking why those Brahmins, who were the only ones allowed to read Sanskrit, kept these things secret and utterly useless for anyone? In Telugu, we have a saying "there is no point in smelling each other's mouths because our grandfathers were drinking ghee in gallons!"

The Ram Setu ( Adam's bridge) connected to Sri Lanka, was constructed using stones that could be just lifted by humans and the shape of the bridge confirms that it is man made , the age of the bridge is 1.6 million years. Please read the articles written and scientific explanation given courtesy NASA - even they have called it the first bridge I.e Adam's bridge. Incidentally the stones were carried by " vana Nar" the humans residing in the jungles - the so called tribals. We have later termed it "Vanar" , the monkey, by a twist of the language And recitation of the epics by bards. Please visit Rameshwaram and have a look at the Setu.