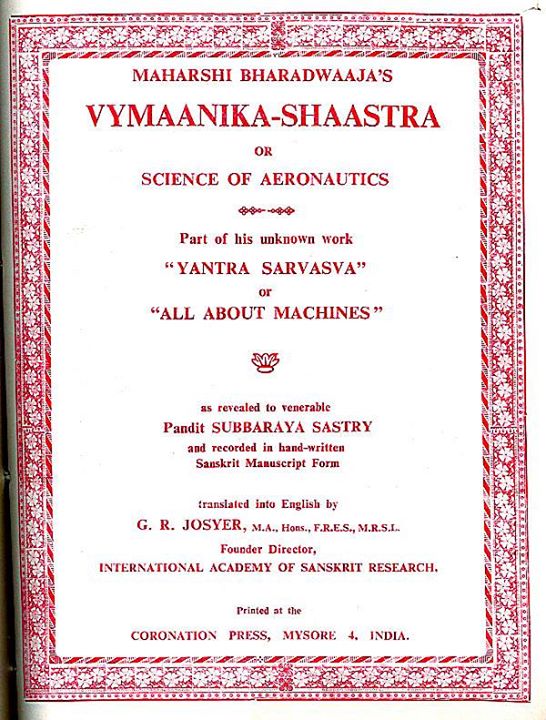 The Vaim?nika Sh?stra ( ??????? ???????, lit. "shastra on the topic of Vimanas"; sometimes also rendered Vimanika, Vymanika) is an early 20th century Sanskrit text on aeronautics obtained by psychic channeling and automatic writing. It makes the claim that the vim?nas mentioned in ancient Sanskrit epics were advanced aerodynamic flying vehicles, similar to a rocket.

The existence of the text was revealed in 1952 by G. R. Josyer who asserted that it was written by Pandit Subbaraya Shastry (1866–1940), who dictated it during the years 1918–1923. A Hindi translation was published in 1959, while the Sanskrit text with an English translation was published in 1973. It contains 3000 shlokas in 8 chapters which Shastry claimed was psychically delivered to him by the ancient Hindu sage Bharadvaja.The text has gained favor among proponents of ancient astronaut theories.
- Wiki

It might be appropriate to read the scientific opinion on this work by five scientists of The Indian Institute of Science, published in 1974:

A 3000 sholka text in Sanskrit in 20th century is a massive achievement (even if it talked about something trivial) -- my *suspicion* is that the transmission has been through a much older text. It would be amazing to know the roots of this text and from where it did originate.

I have this book "vaimaanika sastra". on second i am not remembering whether it is still in repository.

From where should I purchase this book?

The books is also at archive.org, at least for now. https://archive.org/details/pdfy-Do9PYxaj2kxyX4ow

The Book is available on the link : http://bit.ly/1IjvXGN

What is this thing psychically delivery. How antiquity of text is established.

Wow! Our very own The science of Aeronautics. Great India

This book makes people doubt even the genuine achievements of Hindu civilization!. Rare Book Society of India Thanks for posting the scientific opinion debunking pseudo-science too!

incredible india...proud to be indian

Shruti was the way of transferring knowledge from guru to disciple. This process refined all the knowledge.

Vow, what a treatise.