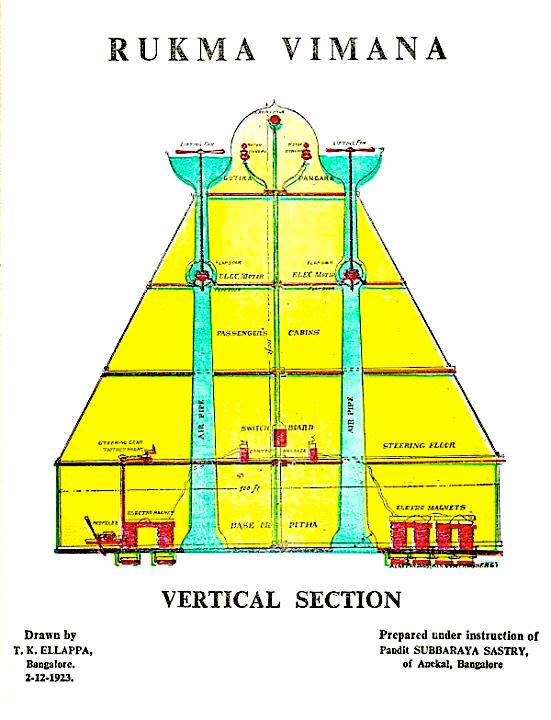 A study by aeronautical and mechanical engineering researchers at the Indian Institute of Science, Bangalore in 1974 concluded that the aircraft described in the text were "poor concoctions" and that the author showed a complete lack of understanding of aeronautics. The study also states 'The Rukma Vimana' was the only one which made sense. It had long vertical ducts with fans on the top to suck air from the top and send it down the ducts, generating a lift in the process."

The researchers at the Indian Institute of Science, Bangalore found that the heavier-than-air aircraft that the Vaimanika Shastra described were aeronautically unfeasible. The authors remarked that the discussion of the principles of flight in the text were largely perfunctory and incorrect, in some cases violating Newton's laws of motion. The study concluded:

Any reader by now would have concluded the obvious – that the planes described above are the best poor concoctions, rather than expressions of something real. None of the planes has properties or capabilities of being flown; the geometries are unimaginably horrendous from the point of view of flying; and the principles of propulsion make them resist rather than assist flying. The text and the drawings do not correlate with each other even thematically. The drawings definitely point to a knowledge of modern machinery. This can be explained on the basis of the fact that Shri Ellappa who made the drawings was in a local engineering college and was thus familiar with names and details of some machinery. Of course the text retains a structure in language and content from which its 'recent nature' cannot be asserted. We must hasten to point out that this does not imply an oriental nature of the text at all. All that may be said is that thematically the drawings ought to be ruled out of discussion. And the text, as it stands, is incomplete and ambiguous by itself and incorrect at many places.

The authors expressed puzzlement at the contradiction and errors in the Vaimanika Shastra text, especially since its compilers supposedly had access to publications that did not make such errors (such as, Dayanand Saraswati's commentary on the Rigveda published in 1878 or earlier).

The subject of this critical study:
Vaimanika Shastra
By Pandit Subbaraya Shastry
Translated by G.R.Josyer
Printed at The Coronation Press, Mysore - 1973

Yaa...I Got This... But Must Be Needed Historical Knowledge also...

Plz......inform to me web address of RARE BOOK SOCIETY OF INDIA

the mercury vapor motors are pretty awesome,a couple of years ago a craft buzzed the bejing airport in China,the picture snapped of that craft matches descriptions of vimana's.there is also a very bright light eminating from the rear of the craft that might idicate it was a mercury powered craft,,somewheres theres a hanger of these craft left over from who knows how long ago,and it seems that the knowledge on how to fly the craft is still around too

the people who wrote the texts about these craft did not feel the need to hide information.they freely shared what they knew and assumed people in the future would know what they were talking about.but like so many of these things.the words can be translated but the meanings have been lost