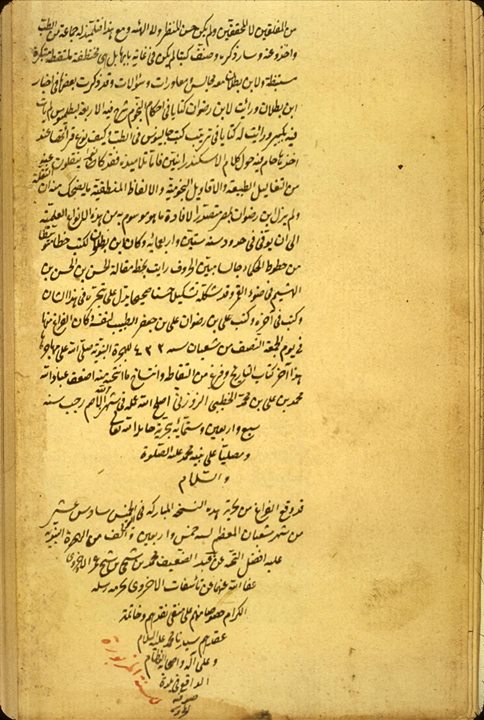 How the Hindu Numbers Came to the Arabs
(Circa 776)

Regarding the transmission of Hindu numbers to the Arabs, al-Qifti's 'The History of the Learned Men' written around the end of the 12th century, but quoting earlier sources, stated:

". . . a person from India presented himself before the Caliph al-Mansur in the year 776 who was well versed in the siddhanta method of calculation related to the movement of the heavenly bodies, and having ways of calculating equations based on the half-chord [essentially the sine] calculated in half-degrees ... Al-Mansur ordered this book to be translated into Arabic, and a work to be written, based on the translation, to give the Arabs a solid base for calculating the movements of the planets. . ." (Mactutor article on The Arabic numeral system).

The book from which the early Indian scholar presented may have been the Brahmasphutasiddhanta (The Opening of the Universe), written in 628 by the Indian mathematician Brahmagupta, which had used Hindu Numerals with the zero sign. (Source: http://bit.ly/1Djmb6z)

Al-Qifti or Ibn al-Qifti (Djamal al-Din Abu 'l-Hasan 'Ali b. Yusuf b. Ibrahim b. 'Abd al-Wahid al-Shaybani) (lived ca. 1172-1248) was a medieval Muslim writer. He is remembered today mainly for his History of Learned Men.

He was a native of Qift in Upper Egypt. He studied in Cairo, and moved to Jerusalem and later to Aleppo, where he compiled most of his works.

26 of his works are known by title, of which only two survive: