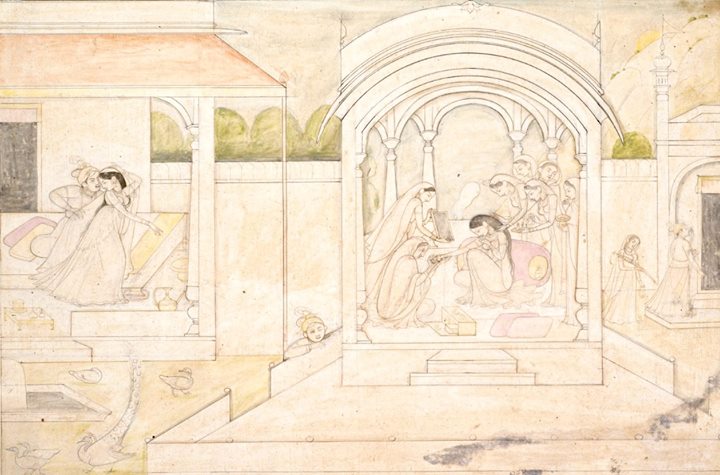 Digital Rare Book:
Nala and Damayanti - A love-tale of East India
Done out of the Sanskrit of the Mahābhārata, the oldest epic poem of India
By Adelaide Rudolph
Published by The Kirgate Press in Canton, Pennsylvania - 1902

Image:
The marital bliss of Nala and Damayanti: Folio from a Nala-Damayanti Series
Attributed to Ranjha
First generation after Manaku and Nainsukh
ca. 1800–10
Kangra, Himachal Pradesh)
Ink and opaque watercolor on paper

In this painting based on the poem of Shrisharsh, the Naishadhacharita, the marital happiness of Nala and Damayanti is described. It is one of a larger group of pictures that remained unfinished but nonetheless are among the most accomplished works of the first generation after Manaku and Nainsukh. Nala appears three times. On the left, he attempts to draw his bride to his bed; in the middle scene, he amuses himself, watching as Damayanti is tended by seven servant girls; on the far right, he enters a palace interior. About the Artist First Generation after Manaku and Nainsukh: Fattu, Khushala, Kama, Gaudhu, Nikka, and Ranjha Active at a number of Pahari region courts, mainly in the Kangra Valley, ca. 1740–1830; sons of Manaku (Fattu and Khushala) and Nainsukh (Kama, Gaudhu, Nikka, and Ranjha) The four sons of Nainsukh and two sons of Manaku are known collectively as the first generation after Nainsukh and Manaku. Building on the artistic legacy of their grandfather Pandit Seu and their fathers, the six younger artists left behind an extensive oeuvre that attests to the family’s consistent artistic vision and uniformly impressive output. A relatively small court like Guler, the family’s home in Himachal Pradesh, could not provide a living for so many talented artists. Nainsukh left the atelier around 1740; he first worked in Jasrota, then in Basohli, and was ultimately joined there by his nephew Fattu and his youngest son, Ranjha. There were numerous small courts in the region, and they offered opportunities for talented painters seeking new opportunities. Surprisingly little is known about the authorship of individual series of paintings, and works cannot be assigned confidently to specific artists. The influence of a large-format Bhagavata Purana series produced by Manaku can be seen in a less accomplished series depicting the same subject attributed to his son Fattu. The faces are more angular, and the scenes are routinely placed in front of a monochrome background. The atmosphere evoked in the texts is not realized nearly as clearly as it is in the works by Manaku. It appears that the family style gradually shifted from the transitional Seu-Manaku phase toward the refined vocabulary of Nainsukh, characterized by a gift for precise observation, an absolutely assured hand, and an exceptional ability to convey human emotions. The Gita Govinda series of around 1775, Bhagavata Purana series of around 1780, Ramayana series of around 1780 and later additions and other works attributed to the artists of the first generation document these changes most impressively. They represent the culmination of Pahari painting, and thanks to their startling combination of dreamlike lyricism and realism, they are among the most alluring of Indian paintings. © The Metropolitan Museum of Art