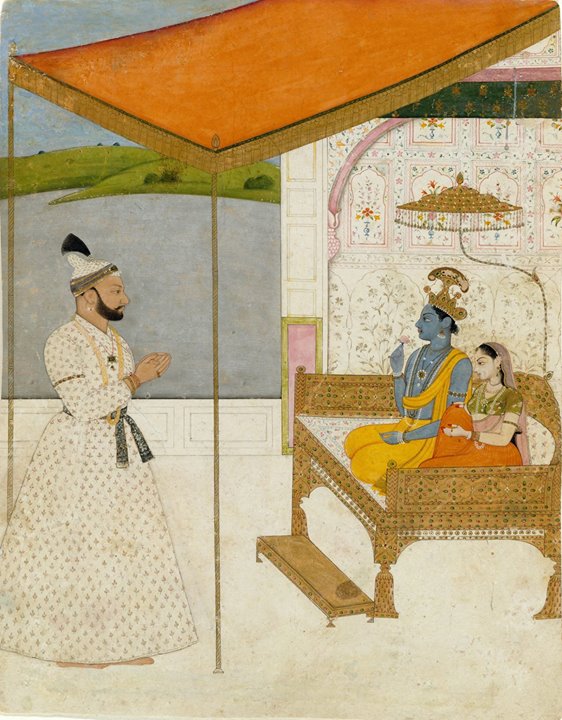 In this intensely personal image of a devotee, Balwant Singh stands in veneration of a vision of Krishna and Radha enthroned on a gilded and cushioned throne. The setting is a terrace in his own court, offset with a beautifully decorated arched niche, painted in a manner to suggest pietre dure ( parchin kari ). An orange-colored canopy projects diagonally into the composition. The remaining space, occupied by the devotee, is devoid of descriptive or decorative details, and a simple vista of a river and hills beyond completes the composition. Subtly, Nainsukh created two contrasting worlds, one occupied by the deity and the other by his devotee (bhakta) standing at the threshold. Balwant Singh gazes on Krishna (dharana) and in turn receives his Lord’s grace.

Nainsukh
Active ca. 1735–78, first at Guler, then at Jasrota for Mian Zorawar Singh and his son Balwant Singh; son of Pandit Seu, brother of Manaku, father of Kama, Gaudhu, Nikka, and Ranjha

Nainsukh, the younger brother of Manaku, is one of the most exceptional figures in Pahari painting. Like his brother, he was schooled in the stylistic idiom developed by his father, Pandit Seu. But while Manaku based his career at the court of Guler on the fundamental principles of his father, Nainsukh took another path, one that is apparent in both his choice of picture subjects and his unmistakable style. Although his early work is insufficiently documented, there are indications that Nainsukh was familiar with the pictures of the Mughal painters and borrowed from them in matters of composition and style.

The best documented phase of Nainsukh’s career begins with his departure from the family atelier for Jasrota, where around 1740, he began painting for a ruler by the name of Mian Zorawar Singh and his son Balwant Singh. Nansukh depicted Balwant Singh in countless paintings that attest to the painter’s incredibly sensitive ability to capture specific situations and moods. His relationship with Balwant Singh must have been a close one, and the range of pictures produced in this period is broad, capturing the minutia of the ruler’s daily life — the prince having his beard trimmed, looking out of the window of his palace, relaxing in front of the fireplace, or writing a letter. Even given the closeness of the relationship, it is extraordinary that in at least two pictures depicting scenes of the prince’s life, Nainsukh appears in a relatively prominent position; one of those works shows Balwant Singh viewing a painting. One can easily imagine the painter shadowing his patron and using his precise gift for observation to register every detail of what he saw, however unimportant. An outstanding example of this is his depiction of a temporary tented memorial shrine on which hangs an amulet that Balwant Singh is frequently pictured wearing, suggesting that the urn contains the ashes of Nainsukh’s patron.

Nainsukh’s gift for precise observation and his interest in realistic pictures indicate that he pursued an artistic vision wholly different from that of his brother Manaku, who worked within more traditional parameters. The works by the sons of Manaku and Nainsukh appear to be more substantially indebted to Nainsukh’s painterly approach than to Manaku’s.

Thanks for posting of this great history of India's 'Pahari' painting & the painting attached is an exceptional work of the great artist Nainsukh.

Wonder what the relative size of the figures denote. It puzzles me.

Radha is almost child like sitting beside lord irish na and the raja takes up a very large part of frame.

Kadambari it doesn't seem to be perspective as Radha is in front of Krishna. Perhaps it denotes importance or stature.