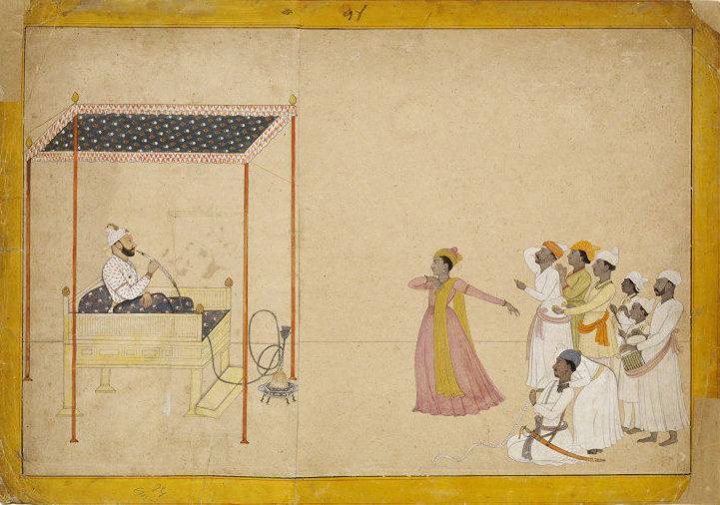 One morning in 1740, a thin young man could be seen heading down the steep cobbled road leading from the Kashmir Gate of the Punjabi hilltown of Guler, and making for the banks of the fast-running river Ravi far below. Nainsukh was just short of thirty, with a slightly hesitant expression, buckteeth, and a downy mustache. He had just been appointed as court miniature painter at the neighboring Himalayan princedom of Jasrota, and in his baggage were the sketchbooks, albums, boxes of pens, squirrel hair brushes, and stone-based pigments such as lapis-blue and malachite-gray that Indian miniature painters used to create their dazzling colors.

It was in Jasrota that Nainsukh—“Delight of the Eye”—began producing the work that led to him today being generally regarded as the greatest of eighteenth-century Indian painters. Nainsukh brought together all the precision and technically exquisite detail of the Mughal tradition, the bright colors of Rajasthani painting, and the bold beauty of early Pahari art—the art of the Punjab hills. To all this he added a humor and a humanism, a refinement, and above all a precise, sharply observant eye that was entirely his own. He broke free from the formality of so much Indian court art to explore the quirky human reality, stripping down courtly conventions to create miniatures full of living and breathing individuals, portrayed somewhere on the boundary between portraiture and caricature, like an Indian Brueghel, only much more elegant and refined.

Even in his large crowd scenes, there are no stock figures: everyone—each courtier, each village beauty, each gardener—is shown in portrait form as a real person, with all their oddities and quirks. Nainsukh’s art—he first learned in the family atelier at Guler, apprenticed to his father Pandit Seu, and worked alongside his elder brother Manaku, then in Jasrota for his most discerning patron, Raja Balwant Singh—is for many of his admirers a summation and climax of the Indian miniature tradition.

But it was not just that Nainsukh was a brilliant miniaturist. His work gives a unique insight into the relationship between an Indian artist and his patron, between a court and a court painter. Raja Balwant Singh and Nainsukh seem to have had an unusually close relationship and must have been of roughly similar ages. The chronology of Nainsukh’s miniatures leads us from the family sketches and self-portraits of the artist’s own adolescence, through the move to Jasrota, his first commissions for Balwant’s father, Mian Zorawar Singh, and on to his first images of Balwant, his future patron. We see Balwant as a good-looking dandy of a young prince in all his silken finery, sitting back on a bolster in a gorgeously striped robe as he puffs away at his water pipe, his falcon glaring from his wrist. Sometimes he is shown as a handsome youth standing regally on a terrace, a sword in one hand, a sweet-smelling narcissus in the other.

Then Balwant succeeds to the throne and we follow the young men of the court on winter evening rides through mustard fields, serenaded by lovely singers; on hawking and lion- and tiger-hunting trips (see illustration on page 75); and to music evenings and dance performances. There are occasional images of quiet evenings where the raja, wrapped in a shawl, sits in front of a blazing fire with a glass of some warming beverage. We also see the painter standing, bowed in reverence behind his enthroned patron, as the connoisseur-prince carefully examines a new devotional painting; the court musicians and attendants look on to gauge his reaction. We even see such everyday yet oddly intimate scenes as Balwant Singh’s visit to the palace barber to have his beard trimmed.

Then, slowly, the story darkens. A group of villagers assemble, led by an aggressive-looking Brahmin. There is some sort of palace coup; the raja is seen standing alone on his battlements, isolated from all. Years of exile follow as Balwant Singh travels the hill country, sheltering in villages, as his court artist, his last confidant, shares his exile. Nainsukh paints him at night, warming his hands on a rustic bonfire among a group of villagers, or writing letters in his tent, careworn and half-naked in the summer heat of his day, with only one attendant left to him. Finally Nainsukh shows himself escorting his patron’s pot of ashes for immersion in the Ganges at Hardwar. It is a uniquely sad and intimate sequence that has no parallel in Indian art.

So much information.. enlightening! Thanks. Btw.. the comment on indian artist n patron just reminded me of the relationship of sambhaji n his poet kalash. I wonder if it is apt though.

Tks for the sharing :)

Dalrymple is just a brilliant writer. So interesting and intriguing....