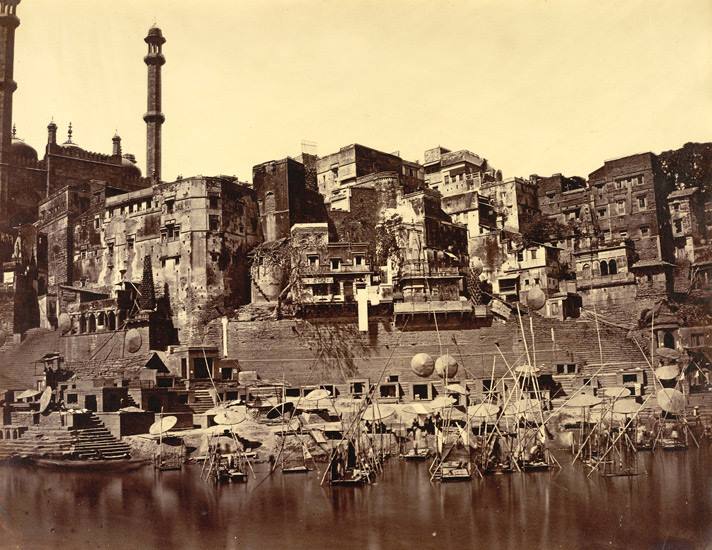 View from the river looking towards the ghat and riverside buildings, with Aurangzeb's Mosque in the left background from 'Views of Benares, from the River Side' taken by Brajo Gopal Bromochary in 1869. "This spot is one of the five chief places of worship on the banks of the Ganges. Five rivers meet at this point. Their names are 'Dhoutapapa', 'Jarananada', 'Kirnanada', 'Saraswati', and 'Ganga'. The first four are now hid under ground. The Ghat is broad and deep, and exceedingly strong. In the month of Kartik men and women bathe promiscuously here, and an illumination is made during the night." Panchaganga Ghat is considered one of the most magnificent ghats on the river ganges in Varanasi with stone staircases leading down to the water. The ghat marks the mythical meeting place of the five sacred rivers and has numerous images of the river goddesses in the cubicles on the ghat. Other cubicles are empty and have yogis meditating and performing yoga. The Smaller mosque of Aurangzeb on this ghat was built on the site of the destroyed Bindu Mahadeva temple.

No plastic bags in the Ganga

I love varanasi and they have made efforts to keep the Ganga clean.