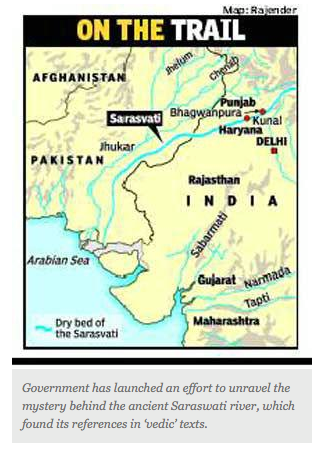 NEW DELHI: Government has launched an effort to unravel the mystery behind the ancient Saraswati river, which found its references in 'vedic' texts.

Though efforts had been made in the past by geologists and scientific community both during British period as well as in independent India, the river remained a mystery so much so that its mention in the ancient texts has invariably been termed as mythological reference.

"There are enough scientific evidences on the presence of the river Saraswati in some parts of the country through which it flowed about five to six thousand years ago...Saraswati is not a myth", said the Union water resources and river development minister Uma Bharti on Tuesday.

Responding to a calling attention motion in Lok Sabha, Bharti said her government was taking up the issue very seriously "to trace the route of the river".

Another belief is that Saraswati dried up/changed course middle of Rajasthan causing the formation of the Desert..

I am reminded of a tamil movie CITIZEN in which an entire village gets erased from the records....