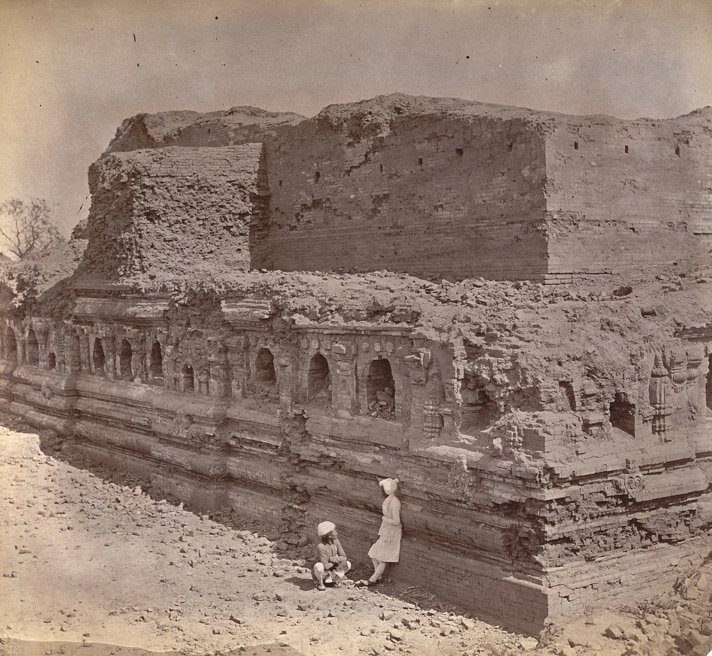 “The mine of learning, honoured Nalanda” — that is how the 16th-17th century Tibetan historian, Taranath, referred to the university at Nalanda. At the time I-tsing was at the university, there were 3,700 monks. The total complex had around 10,000 residents. The structures housing the university were as splendid and as extensive as the learning they housed. When excavations began, the principal mound alone was about 1,400 feet by 400 feet. Hieun Tsang recounts at least seven monasteries and eight halls. The monasteries were of several storeys, and there was a library complex of three buildings, one of them nine storeys high.

As the Islamic invaders advanced through Afghanistan and northwestern India, they exterminated Buddhist clergy, they pillaged and pulverised every Buddhist structure — the very word “but”, the idols they so feverishly destroyed, was derived from “Buddha”. Nalanda escaped their attention for a while — in part because it was not on the main routes. But soon enough, the marauders arrived, and struck the fatal blow. The ransacking is described in the contemporary Tabakat-i-Nasiri by Maulana Minhaj-ud-din.

Minhaj-ud-din rose and came to the notice of the rulers of the time — Qutb-ud-din Aibak and others — because of his raids and depredations, and because of the enormous booty he gathered, booty sufficient for him to set himself up as a plunderer in his own right. “His reputation reached Sultan (Malik) Qutb-ud-din, who despatched a robe of distinction to him, and showed him honour,” the historian writes. With its high wall, its large buildings, Nalanda seemed like a well-endowed fortress to Ikhtiyar-ud-din and his force. He advanced upon it with two hundred horsemen “and suddenly attacked the place”. Minhaj-ud-din continues, “The greater number of inhabitants of that place were Brahmans, and the whole of those Brahmans had their heads shaven, and they were all slain. There were a great number of books there; and when all these books came under the observation of the Musalmans, they summoned a number of Hindus that they might give them information respecting the import of those books; but the whole of the Hindus had been killed. On being acquainted (with the contents of the books), it was found that the whole of that fortress and city was a college, and in the Hindu tongue, they call a college, Bihar [vihara].”

“When that victory was effected,” Minhaj-ud-din reports, “Muhammad-i-Bakhtiyar returned with great booty, and came to the presence of the beneficent sultan, Qutb-ud-din I-bak, and received great honour and distinction…” — so much so that other nobles at the court became jealous. All this happened around the year 1197 AD.

And now the Marxist account of the destruction of this jewel of knowledge. In 2004, D.N. Jha was the president of the Indian History Congress. In the presidential address he delivered — one to which we shall turn as an example of Marxist “scholarship” — this is the account he gives of the destruction of Buddhist viharas, and of Nalanda in particular:

“A Tibetan tradition has it that the Kalacuri King Karna (11th century) destroyed many Buddhist temples and monasteries in Magadha, and the Tibetan text Pag Sam Jon Zang refers to the burning of the library of Nalanda by some ‘Hindu fanatics’.”

Image:
Photograph of the rear view of the ruins of the Baladitya Temple at Nalanda, Bihar, taken by Joseph David Beglar in 1872.

Image: Photograph of the rear view of the ruins of the Baladitya Temple at Nalanda, Bihar, taken by Joseph David Beglar in 1872. While these ruins date to the sixth century Nalanda was originally famous as the sanctuary of Shariputra, one of Buddha's followers, almost a millennia before. It was visited by Buddha and Ashoka, the Mauryan Emperor, however there are very few archaeological remains from this early period. Nalanda soon became a major centre of Mahayana Buddhist studies and by the 7th Century scholars from all over Asia were visiting and studying at the monasteries and university. As time passed it's importance waned until in the 13th century, Muslim influence in the area became stronger and Nalanda was abandoned by Buddhists. Today, the site consists of a row of nine ruined Buddhist monasteries and four two-storey square temples with raised central sanctuaries, one of which can be seen in this photograph. The outside of the latter were decorated with pilasters and images set in niches. James Burgess wrote in 'The Ancient Monuments , Temples and Sculptures of India' that, "Among the ruins of Nalanda, the most notable is the Temple of Baladitya (Narasinhagupta) King of Magadha, who ruled about 530.A.D. It was partly excavated in 1863 and more completely in 1871 and a short description on the door jamb, in the reign of Mahapali-deva, records a donation to the temple in Samvat 913 or A.D. 991, by an oil merchant of Kausambi named Baladitya of the Mahayana School. The base is 80 feet long and the temple is built of brick partly faced with stone. It was part of the great monastic establishment of the great Buddhist School, where Hiuen Tsiang the Chinese pilgrim studied when he visited India in about 640 A.D. and of which he gives so full an account.' Copyright © The British Library Board

So much of history is speculation, and thus can be called 'info-fiction', so we see all the time politicians rewriting the 'info-fiction' to give some sort of legitimacy to their agendas. What is more interesting is how people are so passive to miss information. Now-a-days right wing "Hindu" politicians are re-creating a Hinduism which seems to have a stronger bases in 19th century Victorian society than in ancient India itself! When the Health Minister wants to ban sex education in schools as being unIndian, one can wonder that a) he has no knowledge of India's past, b) that he is intent on ruining the lives of much of the younger generation! So hats off to any sincere historian who can find anything that resembles truth in their research. Thanks Arun Shourie for your interesting article.

presenting a new dimension of history from recorded evidences like above can not be info fiction but could be a anti fiction...

A shame you quote a politician of known orientations rather than a historian. Do you consult an auto mechanic for cardiac surgery assistance?

Unless of course the auto mechanic has greater credibility as in this case.