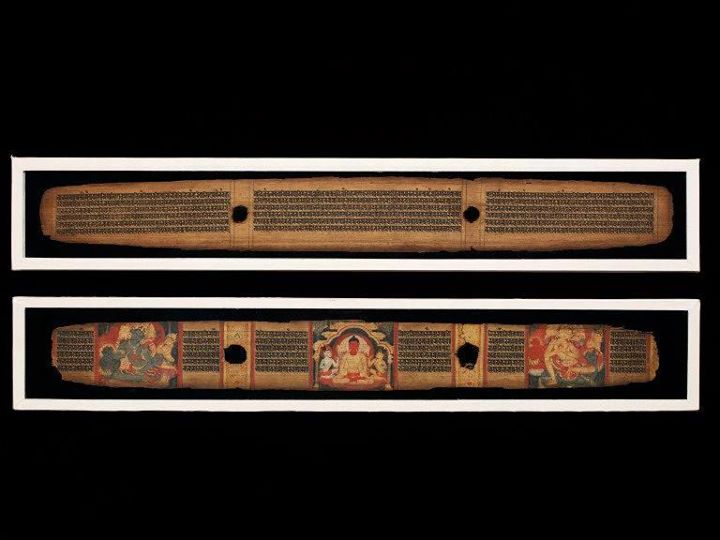 Seated Mahasri Tara. Illustrated palm-leaf folio from the Astasahasrikaprajnaparamita manuscript; from the Vredenburg Manuscript. According to the colophon, this manuscript was donated by a lay devotee, Udaya Sinha, in the 36th year of the reign of the Pala king Ramapala, c.1120; probably Nalanda monastery, Bihar, Pala period.

Folio from a Asthasahasrika Prajnaparamita manuscript, in gouache and ink on palm leaf.

[recto] Text commencing: (Ch XXXII, 527) '(Ganga) nadivalukopamesu until (Ch XXXII,528) paricarito'smy Ananda tva-(ya)'.
[verso] Text commencing (Ch XXII, 528) '(tva) ya maitrena kayakarmana' until (Ch XXXII, 529) 'pujayisyanty arcayisyanty apaca'
Left: Syamatara, the green Tara, seated on a couch with hands in dharmachakra mudra, a blue lotus by her left shoulder. Listening to her teaching are two unidentified goddesses, one of yellow complexion seated on a white lotus, the other of blue complexion seated on a pink lotus. It has been suggested that the yellow goddess is Asokakanta, a form of Marici, because a boar's head appears over the right shoulder. No boar's head can in fact be seen.

Right: Mahakala, as a god of wealth, surrounded by flames with ornaments consisting of coiled snakes. In one hand he holds a mongoose spitting jewels (also an emblem of Kuvera), in the other is a kapala or skull-cap.