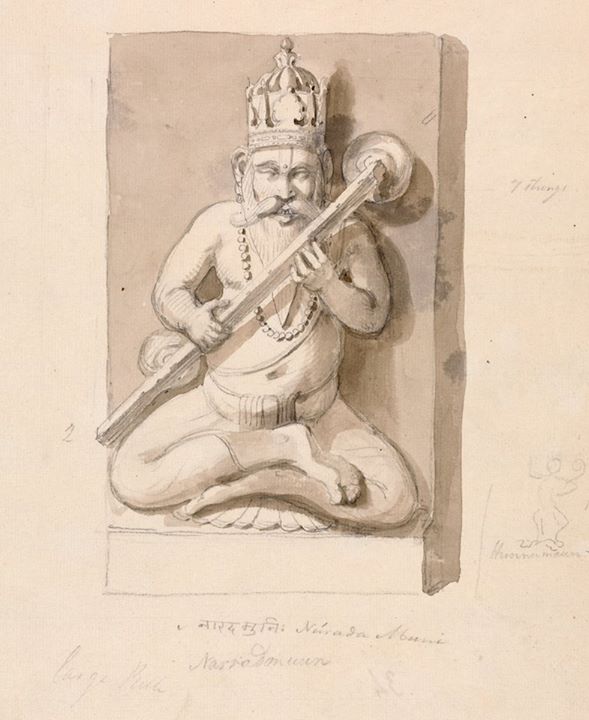 Narada Muni is surprisingly more popular in Thailand than in India today. Narada as the Boddhisattva, is one of the 6 primary Jatakas ( before the appearance of the Buddha), according to Thai system of prioritizing the 560 odd Jatakas. Consequently most Wats/Temples of Thailand have the 10 Jatakas painted as murals on their walls & all kids are taught these at school. This prioritizing of Jatakas appears to have started circa 17th CE so you have a lot of Narada Muni portraits on Thai Wat walls , older than this Daniell sketch. e-Darshan here ( http://www.buddha-images.com/narada-jataka.asp )

Ratnesh Mathur: Isn't it amazing how seamlessly all these mythological personalities got absorbed in more than one religion indicating how they all came from a common cultural ground of an ancient religion which was not even known as Hinduism then.

So true. The segregation of buddhism & this culture called hinduism, into separate religions, is bizarre indeed. By the same logic, the label of hinduism can be sliced & diced into another 500 more religions. Anyways, here is a Burma-teak carving of Narada Jataka, from the only surviving building of the Glass Palace at Mandalay, Burma. This is an amazing all- teak monastery outside the palace walls, called Shwenandaw Kyaung, where all 10 Jatakas are preserved in wood. Close to the monastery, is the "World's largest Book" - the Tripitaka in Pali, along with commentaries on it - Fine carvings on more than 729+ marble slabs in late 18th century at Kuthodaw paya & Sandamuni paya. Editorial committee of 200+ monks & it took 2400 monks to read it in a non-stop relay, under King Mindon. One rare book !