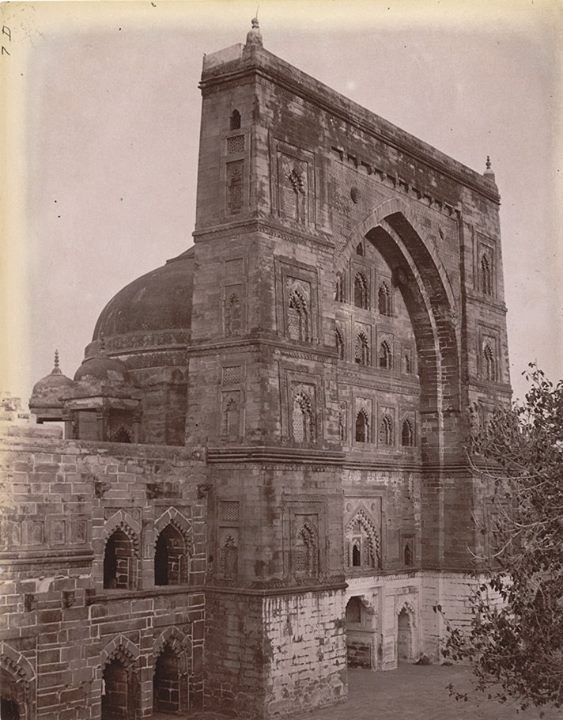 This photograph is a very oblique view taken from the north-west corner of the court, looking towards the high arch of the main facade of the 'jami masjid' or congregational mosque in Jaunpur. Jaunpur lies some 58 kilometres to the north of the famed Hindu city of Varanasi. It was the capital of a thriving and cultured sultanate power from the last decade of the fourteenth century until the city was destroyed by the armies of Sikander Shah Lodi in the 1490s. The photograph was taken by Joseph Beglar for the Archaeological Survey of India. The mosque was built by the Sharqi sultans of Jaunpur in the mid-fifteenth century to supersede the smaller Atala mosque which had formerly served as the venue for Friday prayers. Its foundations were laid by Sultan Mahmud Sharqi (r. 1440-1457). It was subsequently enlarged and completed by Sultan Husain Sharqi (r. 1458-79). The high monumental arch or 'pishtaq' which hides the dome behind is a typical feature of late sultanate mosque architecture in the area.

Would anybody explain the logic behind hiding the mosque ' s dome behind the high arch ?

"...The high monumental arch or 'pishtaq' which hides the dome behind is a typical feature of late sultanate mosque architecture in the area."

Sir, thanks for your feedback, but I feel the architectural design of any time should be justified on its aesthetic and functional requirements. I personally feel none of these are fulfilled by hiding the domes behind the arch.

Shahrukh sahib this reminds me of Tumurid style at Samarkand, it's just stunning.