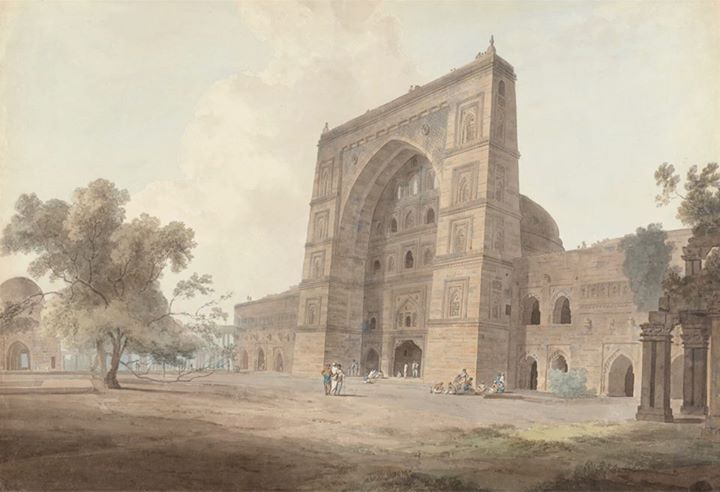 Curatorial Comment:
In 1784 Thomas Daniell set out for India with his nephew William. India offered a rich lode of material for the topographical artist, with large potential markets for Indian view among the British in India and back home. William Hodges's Select Views of India, based on his travels between 1780 and 1783, pointed the way. The Daniells sought to surpass Hodges both in the extent of their travel and view taking and in the topographical accuracy. They remained in India until 1794, when they returned to England and began working up their Indian drawings for publication. Their monumental Oriental Scenery, with 144 aquatints, was issued in six volumes from 1795 to 1808. During their travels around India, the Daniells employed a camera obscura to produce detailed pencil drawings such as the one of Tremal Naig's Choultry in Madura. The drawing, made in July 1792 during a tour of south India, shows the Choultry or Thousand-pillared Hall of Rajah Tremal Naig. The aquatint based on the drawing was published as a Plate 18 in the second volume of Oriental Scenery in 1798. In the commentary to the plate, the Choultry is described as "one of the first works of its kind in the south of Hindoostan." The Daniells drew the Jami Mosque at Jaunpur in November 1789. Their imposing watercolor of the mosque's main entrance is an example of the finished watercolors that they worked up from their Indian field drawings after their return to England. It was reproduced in aquatint in 1802 as Plate 9 in the fourth volume of Oriental Scenery. Thomas and William seem to have worked together on both their field drawings and their finished watercolors, making it difficult to distinguish their individual contributions. The unfinished drawing of Sankrydroog (Sankjardrug) has been attributed solely to William, but the evidence is inconclusive. In the Journal that William kept of their Indian travels, he records being at Sankrydroog on May 24, 1792. Although the Daniells did include several views of Sankrydroog in Oriental Scenery, this particular composition was not published.
-- Scott Wilcox, 2001-05

The water color is easier to understand in terms of scale than the photo.