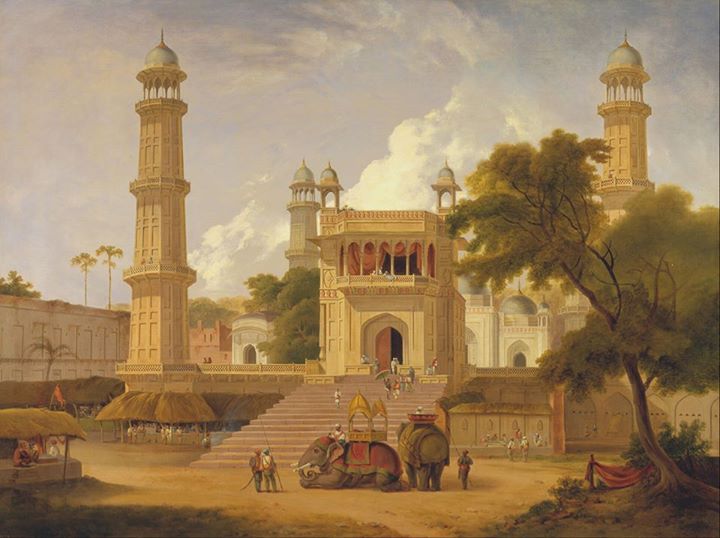 This Daniell painting was spotted by Shashi Kolar in this photo - PM Narendra Modi's office!

glad he did! thanks indeed Mr. Kolar!

Is it a temple turned into mosque ?

And since original is in Yale Museum is the one in the office a print?

You are right Bibhash Gupta! Thank you! http://bit.ly/1yKA90r

But is it the one in office the original?

So what about the one in Yale?

Kesava Deo Temple: Mosque and Krishna Janmabhoomi adjacent to temple The great temple of Keshava Rai at Mathura was built by Bir Singh Deo Bundela during Jahangir’s time at a cost of thirty-three lakhs of rupees. The Dehra of Keshava Rai was one of the most magnificent temples ever built in India and enjoyed veneration of the Hindus throughout the land. Prince Dara Shukoh, who was looked upon by the masses as the future Emperor, had presented a carved stone railing to the temple which was installed in front of the deity at some distance; the devotees stood outside this railing to have ‘darshan’ of Keshava Rai. The famed Keshava Rai temple in Mathura was one such temple, but here Aurangzeb seems to have been motivated by a policy of reprisal, since the Jats in the region had risen in revolt. Present Temple: Statue of Keshav Dev During British rule in India, the area came under direct rule of British India. In 1815, the East India Company auctioned the area of Katra Keshavadeva, which was purchased by the then Raja Patnimal of Banaras. Although, the Raja of Benares wanted to build a temple there his wish remained unfulfilled and the family had fight several legal battle for ownership of land with Muslim community of Mathura, in which, the court finally ordered that the land belongs to present heirs of Raja of Benaras. In 1944, Madan Mohan Malviya was distressed at plight of the site and arranged for purchase of land from Raja Krishna Das of Benaras, who sold the land only at cost of Rs. 13,000/- recovering just the cost of fighting court battles. Meanwhile, Malviyaji without seeing the temple work begin. Then Jugal Kishore Birla of Birla group decided to take the leading role to fulfill the wishes of Malviyaji and formed a private trust in 1951 to which the rights of land were later transferred. Jaidayal Dalmia of Dalmia Group was another leading personality, who took untiring efforts and the temple was finally constructed over the site. The trust which runs the temple has a glorious list of Trustees besides Birla and Dalmia family members like Ganesh Vasudev Mavalankar, Anantashayanam Iyengar, Swami Akhandananda Saraswati, Swami Vamdevji Maharaj. The present head of temple is Mahant Nrityagopal Das.The construction of the temple was completed in 1965 at a cost Rs 15 million. Next to the temple, within the complex is a small room that looks like a prison cell, where it is said that Lord Krishna was born. The excavation of this site began in 1953 under the chairmanship of Swami Akhandanada, when the volunteers started clearing the debris and work continued for several decades later under supervision of Babulal Bajaj and Phool Chand Khandelwal, till the prison complex was completed in 1982. Source: http://bit.ly/1iCqkfW

Very beautiful. !! But I would like to point out that the painting and the photograph shown is two different mosques. Please check the painting, it has seven Windows but In the photograph, there are only three Windows. please comment.

Maybe its the other side.

but which Hindu temples were there before those two different mosques? Hindu temples surely were destroyed to give way to such Muslim buildings? We would like to know the price of sacrifice by Hindus for such construction to be there..

1669 witnessed a serious anti-imperial outbreak, orchestrated by the Jats in Mathura against the oppression of the local faujdar, Abdun Nabi, who they later killed. It took almost a year for this rebellion to be quelled by the new faujdar, Hasan Ali Khan. It was with the intent of driving a political message that the Keshav Rai temple at Mathura, built by the Bundelas, was demolished in 1670 and a mosque built on the site. The idols were brought to Agra and layed under the steps of Jahanara's mosque.

Ms. Rana Safvi, the Daniells would take detailed pencil sketches on location, using devices like the camera obscura, and would use them to churn out fair copies - that is, aquatints that would each be individually painted with the right tones - for sale. There is no original, as such. You can see that the cloud patterns over the mosque are different in the painting posted on the page and in the one in the PM's office.

It was the handiwork of fanatics. Only the Jats were capable of teaching a lesson to the Mughals but innumerable atrocities were inflicted upon them during the reign of Bahadurshah-I when the he unleashed Man Singh on them.

Thanks a lot Mr Kolar. I have been a Daniells fan but didn't know their method. And thanks for the explanation which is correct.

The Keshavdev temple was destroyed as an act of reprisal by Aurangzeb. But the mosque was constructed by his Governor, Abu-in-Naseer Khan. The funds for the construction were solely raised by the Governor and not funded by the Emperor. Hence the caption credited by Daniell & Co. to Abu Naseer...

The British adopted all sorts of tactics to maintain the policy of " DIVIDE AND RULE " , even divided India before leaving it so that the people continue to kill each other.

Aurangzeb's controversial mosque guarded by Indian armed forces, last winter. No photography allowed inside this & the new temple built adjacent to it. The imposing structure was clearly built by destroying the Keshav deo temple in the heart of Mathura .Today, the sole entry to this mosque, is through a dirty road , across the railway line (which runs between Mathura & Vrindavan). The new Keshav temple adjacent to it, can be accessed from the main city only. After much private donation, Keshav temple's top now towers over this mosque's dome, from the city side. The mosque is rarely used but functional. Much government money & time goes in protecting it. A visit here reminds you why Ramjanmbhoomi is such a sensitive issue.