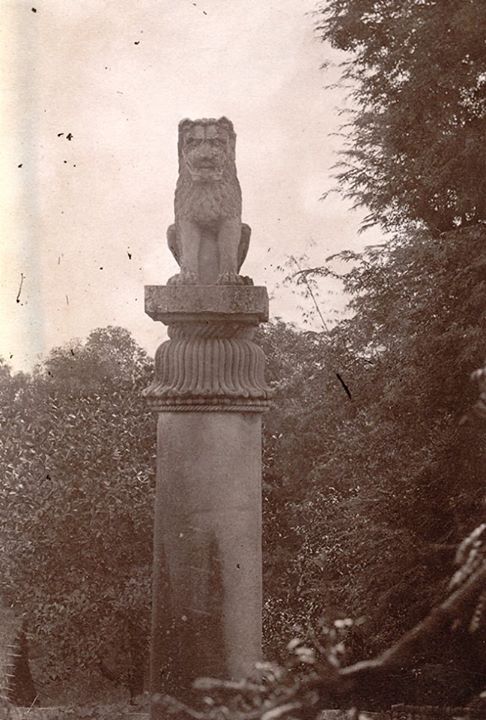 Image:
Photograph of the lion capital of the Asoka Pillar at Basarh, Mizzarfurpur District, taken by Henry Baily Wade Garrick in 1880-81. Ashoka (reign ca. 272-231 BC) is the most well known king of the Maurya dynasty. After his conquest of the kingdom of Kalinga in modern day Orissa, struck with remorse at the suffering he caused, Ashoka converted to Buddhism and spent the rest of his life propagating his dharma (law). In order to achieve this, he had numerous edicts inscribed on rocks, pillars and caves throughout his vast empire. These are written in various vernaculars and represent the earliest written document from the Indic regions. From these edicts it would appear clear that Ashoka was an extremely tolerant and benevolent monarch. It was originally thought that Ashoka was the first to erect pillars, however recent interpretations have shown that it is more likely that the edicts were inscribed on pillars that had been sculpted in the preceding centuries, and already had religious connotations. The pillars were imbued with cosmological significance; each symbolised the world's axis, the separation between earth and heaven.

Cunningham and H.B.W. Garrick wrote about this photograph: ''I took two photographs of this monument, one a front, and one a side view, which was a work of some difficulty, as the pillar is surrounded by a courtyard, and we were obliged to build a temporary platform, about five feet high, with some bricks lying close by, to admit of the camera approaching to within a reasonable distance of the lion. The chief characteristic of this column is its squat appearance, and though the lion is fairly well sculptured, it looks heavy and unwieldy, and is, in my opinion, altogether less grateful to the eye than the more slender and truly elegant column at Lauriyanavandgarh.''