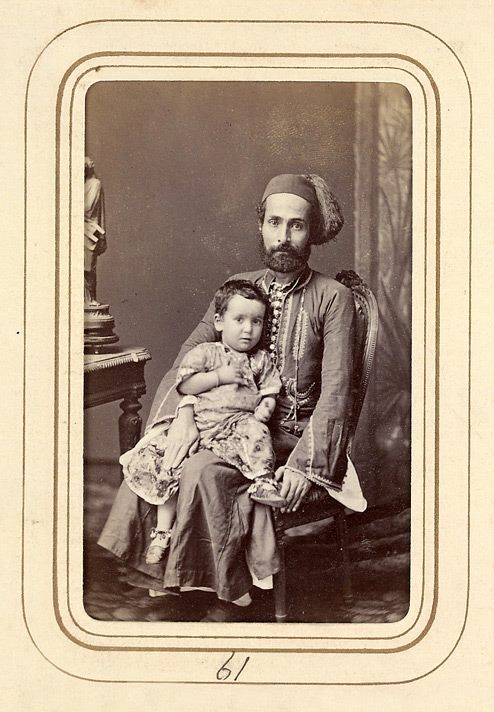 Digital Rare Book:
Armenians in India
From the earliest times to the present day
By Mesrovb Jacob Seth
Published by the Author, Calcutta - 1937

Full-length seated carte-de-visite portrait of a child sitting on his father's lap. The inscription suggests that this is a Jew who felt happier in the western business environment of Calcutta in adopting a Christian veneer. The Armenian community had been present in Bengal as merchants and traders for many centuries, and followed trade to the Dutch settlement of Chinsura and to the English one at Calcutta. Indeed a tombstone in the Armenian church in Calcutta dated 1630 indicates that they had arrived there before the English company in 1690. The Armenian traders in Calcutta were generally tolerated and accepted by the European business community. This is one of a series of prints of ethnic types and occupations taken by Bourne and Shepherd in the early 1870s. In the 19th century photographers sought to document the diverse races, customs, costumes and occupations they encountered on the sub-continent. In Europe the rising interest in ethnology, together with a desire for exotic souvenirs of the east fuelled the demand for such prints.

The Armenian Church and Armenian Street in Kolkata always made me wonder about the history of Armenian people! Thanks for the book.

Even in chennai there is a church n street exists in that name...

There is an ARmenian cemetery in Surat

I have seen Armenian inscriptions in the Church on St.Thomas Mount, Chennai.

I am truly thankful for this book...as I am writing a book on old Kolkata and needed information about the Armenian settlements in India. God Bless...