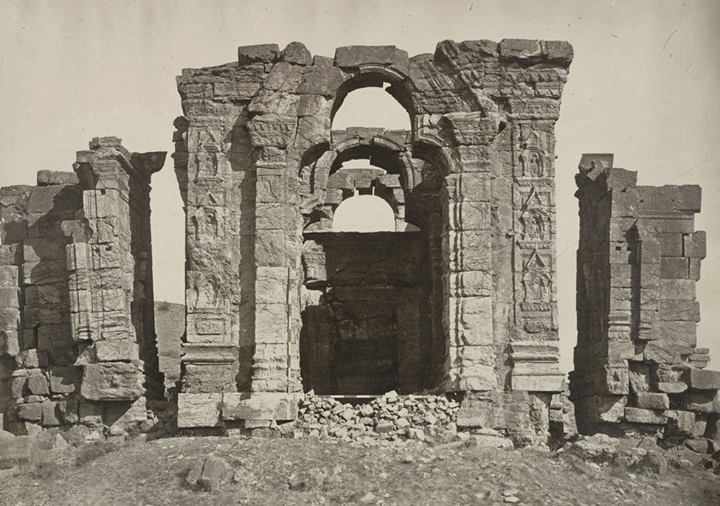 Image:
Photograph of a frontal view of the entrance of the Surya Temple at Martand in Jammu and Kashmir, taken by John Burke in 1868. This photograph is reproduced in Henry Hardy Cole's Archaeological Survey of India report, 'Illustrations of Ancient Buildings in Kashmir' (1869), in which he wrote, ' The most impressive and the grandest ruins in Kashmir, are at Marttand, which is about three miles east of Islamabad.' Kashmir is dotted with the remnants of temples from its pre-Islamic history prior to the 14th century, many of which were deserted or sacked by the early 15th century. Sheltered on one side of the Pir Panjal range, and near the crossroads of Asia, Kashmir received influences from Buddhist, Gandharan and Bactrian culture and developed its own distinct style of architecture which coalesced in its medieval period of temple building. Buddhism, Vaishnavism, Shaivism, all were popular in Kashmir. The Surya temple is situated on a high plateau and commands superb views over the Kashmir valley. Dedicated to the sun god, it is considered a masterpiece of temple architecture in Kashmir. It was built by Lalitaditya Muktapida (ruled c.724-c.760) of the Karkota dynasty, one of the greatest of Kashmir's rulers, under whom both Buddhism and Hinduism flourished. The temple consists of a principal sanctuary standing on a high plinth in a rectangular colonnaded court, surrounded by 84 small shrines. Its roof has disappeared but the immense doorway before the sanctum still stands, consisting of a trefoil arch set within a tall triangular pediment standing on engaged pilasters.

The arches seem like Roman influence, the carvings and sculpture Egyptian influence....