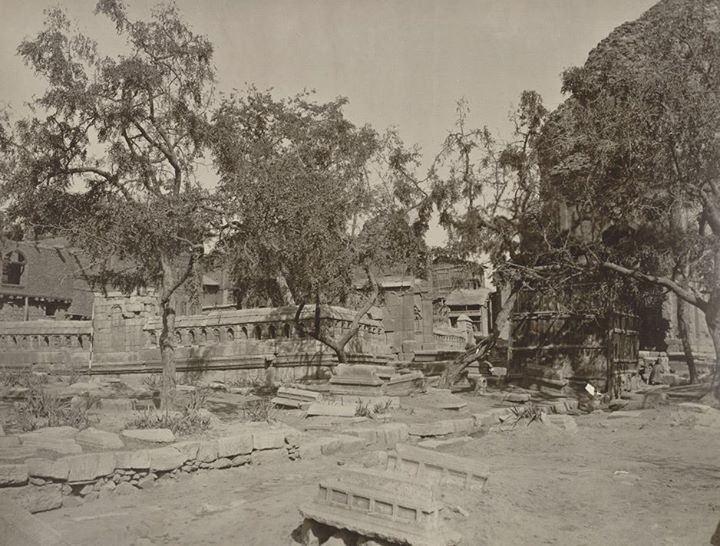 Photograph of the enclosure surrounding Zain-ul-abidin's tomb at Srinagar in Jammu and Kashmir, taken by John Burke in 1868. This photograph is reproduced in Henry Hardy Cole's Archaeological survey of India report, 'Illustrations of Ancient Buildings in Kashmir' (1869). Cole described this image, 'The Queen's Tomb [Sikander's queen] can just be seen in the right-hand corner...to the left of it, and in the same picture, is the Enclosure which once surrounded a Hindu Temple, but which now contains the Tomb of Sikander's son Zein-ul-ab-ud-din.' Zain-ul-abidin (ruled 1421-72) was one of Kashmir's greatest rulers from its Islamic period, under whose reign it enjoyed peace and prosperity and progress in the arts. His father Sikandar has been tainted in Kashmiri history as Butshikan or idol-breaker, but Zain-ul-abidin was tolerant towards his Hindu subjects. The fertile valley of Kashmir offered a retreat from the crossroads of Asia in the high Himalayas, and developed its own distinctive architecture. Buddhism was established here from the 3rd century BC but was eclipsed by the 8th century AD by the flourishing Hindu Vaishnava and Shaiva cults. Kashmir finally became a great centre of the Shaiva religion and philosophy and a seat of Sanskrit learning and literature. By the 14th century Kashmir came under Islamic rule. Most of its early temples were sacked in the 15th century and their remains were sometimes incorporated in later Islamic monuments. The tomb of the mother of Zain-ul-abidin was built in c.1430 on the foundations of an old Hindu temple, and was decorated with glazed tiles. Immediately to the north of this building is an enclosing wall and gateway made of Hindu materials, which contains a number of tombs, one of which is said to preserve the remains of the Sultan himself.