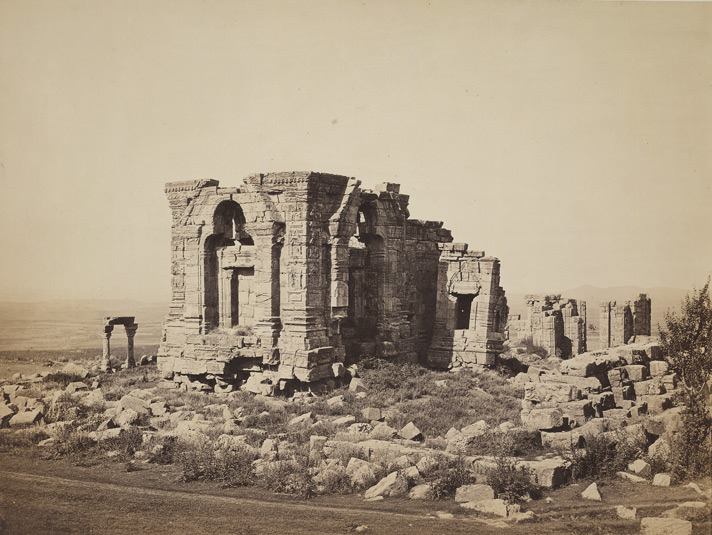 Ruins of the Temple of Martand, Kashmir - 8th century AD

Photograph of the ruins of Martand from the 'Strachey Collection of Indian Views', taken by Samuel Bourne in 1864.This Hindu temple to the sun deity was built by Lalitaditya (c.724-60), the most powerful and renowned monarch of the Karkota dynasty. It displays a mixture of classical architecture, traditional Hindu themes and the gabled roofs characteristic of the Himalayas.

I have been to this place, amid Apple Orchards and Wall nut Trees, long back. One of he ancient Sun Temples was there..

Our history lessons are so deficient; we never studied about this ( Karkota) dynasty, at all...

History as taught in school tends to be Delhi centric, this is a regional dynasty that only Kashmir specialists of ancient history would usually know about.

the great karkota dynasty that prevented foreign invaders like arabs,chinese,huns from invading india for centuries...alas our history books will never tell future kids about kings like lalitaditya

Why not use this platform to get into syllabus wherever it's possible.or all such threads that keep you rooted. !

Not just history but an epistemological look at all knowledge that came from the west in relation to what was originally Indian needs to be done to ensure that humanity gets the true benefits of our great civilization , and to ensure that our kids generate a sense of pride in the validity of the achievements of their great homeland and its forefathers.

Why GOI doesn't officially recognise sharada, as the original script of the Kashmiri language ? Himalaya !

I have this panoramic photographs about 3 1/2 ft wide taken in 1930s. Apologies for the bad quality of this photo.

Very sad that few people know about Karkota dynasty and its masterpiece of architecture.