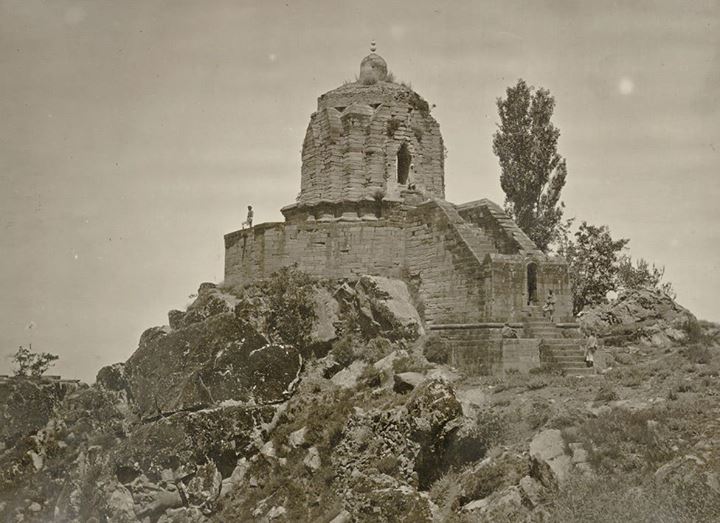 Temple of Jyeshteshwara [Shankaracharya], on the Takht-i-Suliman Hill, near Srinagar. Probable date 220 B.C.

Photograph of the Shankaracharya Temple on the summit of Takht-i-Suleiman (Throne of Solomon), near Srinagar in Jammu and Kashmir, taken by John Burke in 1868. This view was reproduced in Henry Hardy Cole's Archaeological Survey of India report, 'Illustrations of Ancient Buildings in Kashmir,' (1869), in which he wrote, 'The Takt-i-Suliman Hill overlooks Srinagar, the capital of Kashmir; standing one thousand feet above the plain, it commands a noble view of the Valley and its surrounding ridges of snow-topped peaks...The Temple of Jyeshteswara rests on the solid rock, and consists of an octagonal stone basement twenty feet high, on which is supported a square building: on each of the four sides are two projections which terminate in a pediment and a gable, the latter intersecting the main roof half-way up its slope. The terrace surrounding the Temple is reached by a stone staircase encased between two walls, and a doorway , exactly opposite, leads to the interior, which is a small and dark chamber, circular in plan. The ceiling is supported by four octagonal columns, which surround a Basin containing a Lingam encircled by a snake.' Commanding a panoramic view of the city of Srinagar and Dal Lake, this temple with its square plan, recessed sides and circular inner sanctum is one of the earliest Hindu shrines remaining in Kashmir, dedicated to Shiva, but as yet not firmly dated. It is possibly a 7th century temple which replaced an earlier Buddhist monument of the third century BC which local tradition believes was founded by Ashoka's son Jhaloka. It is popularly called Shankaracharya after the 9th century Hindu philosopher-sage who visited Kashmir and is associated with it.

Thank you for these wonderful shares. For many years in a row,as a school-girl I could look up and see Shankaracharya at a distance. Never thought I would not see it again in person for decades afterwards.

Shankaracharya temple built in around 200 BC,the place is now covered with tall wooded trees and greenery

Sri Aurobindo visited this temple in 1903. He wrote this poem : The hilltop temple "After unnumbered steps of a hill-stair I saw upon earth’s head brilliant with sun The immobile Goddess in her house of stone In a loneliness of meditating air. Wise were the human hands that set her there Above the world and Time’s dominion; The Soul of all that lives, calm, pure, alone, Revealed its boundless self mystic and bare. Our body is an epitome of some Vast That masks its presence by our humanness. In us the secret Spirit can indite A page and summary of the Infinite, A nodus of Eternity expressed Live in an image and a sculptured face." Last year, some 110 years later, I visited the place and was taken aback by the rapturous atmosphere (in spite of some renovations done in poor taste in the sanctum sanctorum). A place with a pulse!

love the poemwill print and keep thanks

Trekked there from Badami Baug, Shrinagar in 1972.

Nice to learn of this