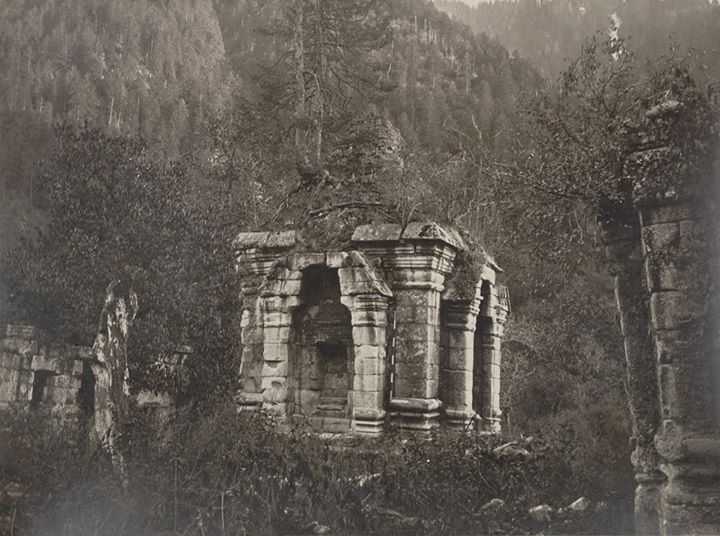 Group of temples near the village of Wangut in the Scind Valley, Kashmir - 8th century AD

Photograph of a temple at Wangat, Jammu and Kashmir, taken by John Burke in 1868. This photograph is reproduced in Henry Hardy Cole's Archaeological Survey of India report, 'Illustrations of Ancient Buildings in Kashmir' (1869), in which he wrote, 'The locality of the temples nearer to Wangat is known by the name of Rajdainbal. This group consists of six buildings, all more or less ruined, and the remains of an enclosing wall...The largest Temple of the Group measures 24 feet square, and has a projection on each of its four sides...The principal Temple of this group is in a better state of preservation than any of those at Nagbal [the second set of temples 200 yards away]. The dome and roof are of masonry, and both maintain their original vaulted and pyramidal forms. A large quantity of stones, of huge dimensions, lie heaped in the enclosure...The two doorways and side recesses show signs of elaborate carving...A tall fir and other trees have grown on the pyramidal roof...and it was probably by their expansion that the outer stone facing became displaced.' Wangat, some 50 kms north-west of Srinagar is near the pilgrim's route to sacred Gangabal lake in the snowy peaks of the Himalayas. It has three groups of ruins, within a short distance of each other. Two groups are of temples and the third is of a substantial construction of which only the plinth remains. The northernmost collection of buildings consists of a walled enclosure within which is a main temple with supplementary shrines attached to it and a large cistern carved out of a single boulder. The southern group has a central temple with several shrines around it, placed on a platform which is partly natural and partly built. The temples possibly date from the 8th to 9th century. The location of Wangat is amid steep wooded gorges with the Wangat river foaming through, and the deserted temples have become one with their environment.

I have been to this place long back and saw the structures around. Though lot of change in the area must be there since may visit including construction of a nearby Dam .

must be really mesmerizing!

how beautiful must have been in those days of dynasty!!!

must be having a lot many stories associated with it..the mysterious look of it say it all!!

Truth is stone or truth is thought ? Himalaya !