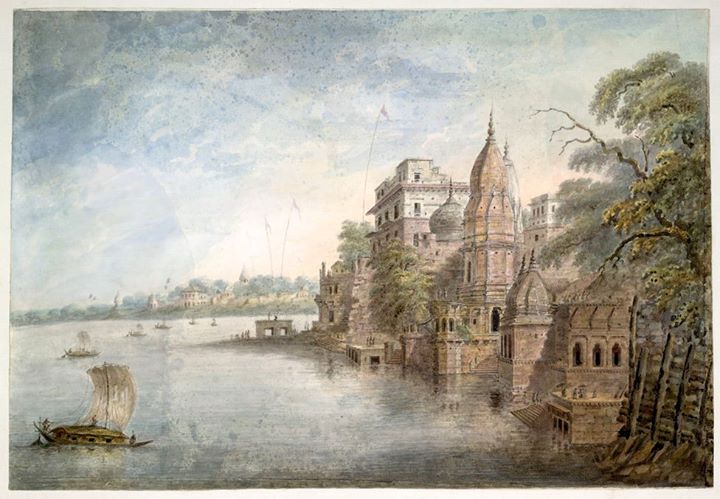 Watercolour of Varanasi's Dashashvamedh Ghat on the Ganges river from 'Views by Seeta Ram from Patna to Benares Vol. II' produced for Lord Moira, afterwards the Marquess of Hastings, by Sita Ram between 1814-15. Marquess of Hastings, the Governor-General of Bengal and the Commander-in-Chief (r. 1813-23), was accompanied by artist Sita Ram (flourished c.1810-22) to illustrate his journey from Calcutta to Delhi between 1814-15.

Dashashvamedha Ghat, on the River Ganges at Varanasi (Benares), is one of the busiest of the cities many ghats, where residents and pilgrims perform their ablutions, Brahmin priests sit on wooden platforms under bamboo umbrellas to offer prayers for their clients, masseurs ply their trade and boatmen jostle for custom. The name of the Ghat is derived from the legend that this was the site where Lord Brahma performed the "Das ashvamedha" (10 horse) sacrifice for King Divodasa. This ghat is regarded as one of the world’s most celebrated tirthas, or ‘crossing places’ where the devotee can gain access to the divine and gods and goddesses can come down to earth. An idealized depiction of the Dasasvamedh Ghat and the temples just downstream from it, the river very high. Inscribed below: 'Temple of Rajah Dusserrauth at Benares with the House he lived in to the left.'

Of much relevance today !!!

Sitaram tends to paint places with an Arcadian perspective, shorn of human figures. Thank you for sharing his work.

It's not as grand as it looks here.

What happened to the varanasi of old?