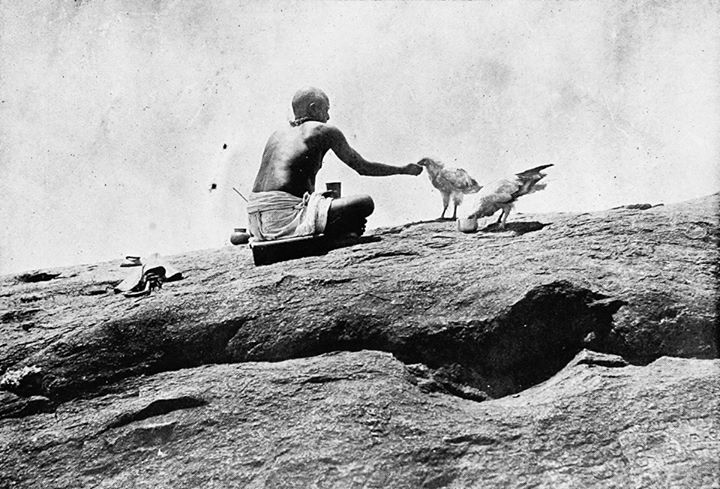 Article:
Vultures continue to give a miss to a temple in Tamil Nadu
Deccan Herald, May 03, 2014

Some 14 years ago, newspapers published a report stating sick vultures were being taken by an Indian Airlines flight from Jaipur to Mumbai for finding out the reason, why most of the vultures in India, as much as 97 per cent, have become extinct.

In the famous Keoladeo sanctuary in Rajasthan, during breeding season, only 20 nests were found in 1999 compared to 350 nets the previous year! After all, they have a life span ranging from 50 to 60 years and they breed every two years by laying a single egg at a time.

This scarcity of vultures has affected urban and rural life in various ways, and in Mumbai, the Parsi community with its hallowed Towers of Silence (where the dead are disposed off by being eaten by vultures), is thinking of starting an aviary for vultures! But, everybody forgot about the disappearance of the most famous vultures in Indian history--Pakshith­ee­r­tham Temple in Chengalpat district in Tamil Nadu. The Tamil name of Pakshi­theertham is Thirukazhugundram, meaning the “Hill shrine of sacred vultures”.

Till 1998, exactly at 11.50 am, two vultures would circle around the hill shrine of Shiva and alight on a platform at the hill-shrine, where a priest would be waiting for them with the temple prasadam.

For hundreds of years as per tradition and at least for 328 years as noted by historians, two vultures had been paying their respect/visit to the famous Vedagi­rishwarar temple at Thirukazhugundram. Dutch visitors to this shrine in 1670 had witnessed the two vultures descending from the skies to feed on the food provided by the temple priests and in 1998 many had photogra­phed the two vultures coming in for the daily meals, exactly at 12 noon, even as hundreds of tourists stayed a few yards away. Then on one day in 1998, the birds failed to appear and till about 15 years later, have not reappeared.

Much before the vultures arrived, the priest in charge of their feeding would come with buckets of prasadam and wait for the “guests”.

As the vultures were spotted, there would be a sudden burst of enthusiasm among the watching devotees, and everybody would become silent, lest the vultures refuse to land in midst of noise.

After a slow meal, they would take off in the direction of Sri Lanka and would soon vanish from view.

plastic bags, toxic farming practices...the new and modern India has been killing itself for years now. It is time to clean up the mess and educate people about ecology before they have the same mess as China which recently declared, officially, that large amounts of their farming land is now a toxic soup of heavy metal contamination.

I remember seeing the "classic looking" vulture with the long neck and collar, on my first few visits to India, but I haven't seen any for about fifteen years now.

Why Vultures left is for everyone to ponder. Its Ominous

Pakshi-tirtha at Tirukkalukundram. Nearby Mahabalipuram The place is famous and considered a holy place. every day for the past 5,000 years or more two eagles come to the summit of the mountain Veda-giri to take the prasad of Lord Siva from the hand of a local Brahmin. The birds have been coming daily for thousands of years and hundreds of pilgrims gather at the summit of to witness the event

vultures r awesome birds.majestic n graceful.they clean away the surroundings by eating carrion.diclofenac is root cause.its used as painkiller in injections n medicines for cattle.The diclofenac keeps accumulating in the body of cattle.most farmers aftr the cattle dies hardly bury or burn them.but they dispose it like garbage.the vulture which eats these cattle corpses is poisoned by diclofenac & dies a steady death.kite flying manja is also another cause but @ a little %

Witnessed this in the 70s at noon. A great sight.

May they come back..

Dr.Gift Siromaney of MCC, an ornithologist, wrote in The Newsletter for Birdwatchers Vol.XVII No. 7 June 1977 explaining the mystery. This article 'The Newophron Vultures of Thirukkalukunram" has been republished as a chapter in the book INDOLOGICAL ESSAYS Commemorative Volume for Gift Siromoney. in 1992. The gist of the article is that the birds nested in the temple tower for generations. I have seen them accept food from the priest once, in 1957. I have been there quite a few times since but has never seen the birds. A medival Tamil poem talks about the birds as கழுகுதொழு வேதகிரி

Brahminy Kites photographed at the ruins of Ahichhatra, Bareilly district, UP, last year. Sitting atop the temple complex overlooking the two 3rd century stupa like structures. Ahichhatra of course was one of India's largest towns from 800 BC to 5th CE. Capital of Panchala & Drupad/Drona/Draupadi's hometown of the Mahabharata. You can also spot Brahminy kites near Hastinapur in Meerut district. Sarus birds, ( at 6ft., world's largest flying creatures ) & Hornbills are quite common in this ganga-yamuna doab lands, though the depletion in numbers is quite visible, year on year too. Mostly pesticide deaths.