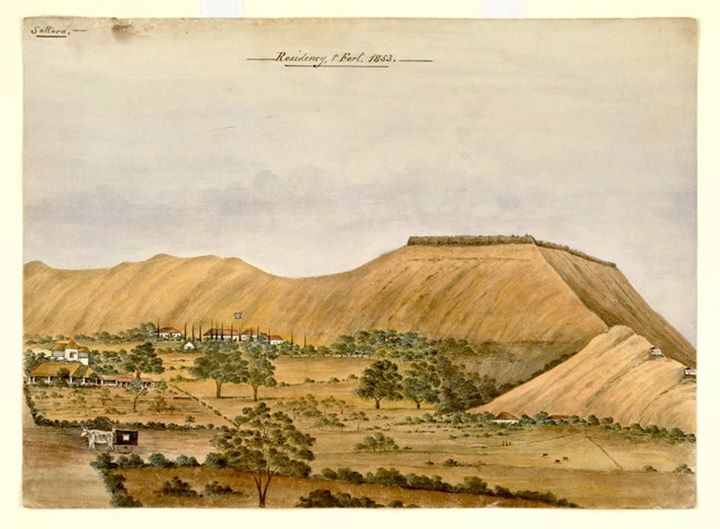 Water-colour painting of Satara Fort by George Hutchins Bellasis (1807-1862) in 1853. This view shows the British Residency with a Union Jack flying and other bungalows at the foot of the hill. Inscribed on the front in ink is: 'Sattara. Residency. and Fort. 1853.'

Satara is situated in Maharashtra in a valley between two hills near the confluence of the Kistna and Verna rivers. The British established a cantonment here that contained the old Residency (1820) which was used in 1849 by the British colonial administrator, Sir Henry Bartle Frere (1815-1879). It has been suggested that the fort was built by the Silahara Dynasty and later strengthened by the Marathas, who made it the capital of their empire. The walls of the fort are four metres high and there are many water tanks within the fort.

BELLASIS, George Hutchins (1778-1822) Soldier, amateur artist. Born: 23 October 1778 at Holly Hill, Bowness, Westmoreland, England. Eldest son of Major-General John Bellasis (1744-1808) HEIC, Commander of the Forces and Colonel of Artillery at Bombay, and Anne Martha Hutchins (1755-1797) daughter of the Reverend John Hutchins and Anne [nee Stephens]. Initially there were plans that George would enter the Church, and to this end he had studied and matriculated from Queen's College, Oxford, on 29 January 1798, aged 19. This may have reflected, in part, the paths that had been taken by his paternal uncle, Rev. George Bellasis (1730-1803) and his cousin, Joseph Harvey Bellasis (1759-1799). However no further initiative appears to have been undertaken at this time to secure a clerical position, and instead a commission was acquired for him in the 19th Light Dragoons. This regiment had been serving in India since it was raised for duty there in 1781-82. It was the only British cavalry unit in India for sixteen years, and it took part in both campaigns against Tipu Sultan in Mysore in 1790-1792 and 1799. In 1800, the 19th fought against Dhoondia Wah and his rebels, and assisted in the defeat of his irregular army. In September 1803 the 19th, led by Colonel Arthur Wellesley, later the Duke of Wellington, also played a key part in the famous battle against the Marathas at Assaye. George Hutchins Bellasis departed from Portsmouth for India on board the Airly Castle, East Indiaman, on 31 March 1801, aged 23 years. His brothers, Joseph [aged 20] and Daniel [aged 16-17], also departed in the same large convoy of East Indiamen, sailing on board the Worcester, East Indiaman. The convoy safely reached Bombay 3½ months later on 23 July 1801, and the three brothers were met at dockside by their brother, Edward [aged 19] who was already serving in India with the Bombay Engineers. All four brothers were now reunited with their father for the first time in over a decade. Their youngest brother, John, remained behind in Britain with the Carpenters, still being aged only 10 years. The family reunion took place at 'Randall Lodge', the General's country residence on the promontory leading to Malabar Point, Bombay. At the time of George's arrival Colonel Arthur Wellesley (the future Duke of Wellington) was living nearby in 'Surrey Cottage'. He was recuperating from a severe case of a medical complaint referred to as the 'Malabar Itch' (a kind of ringworm). The symptoms were similar to venereal blotches and involved an unpleasant treatment with nitric acid baths. This had prevented Wellesley from participating in the military expedition to Egypt under the command of Major-General David Baird. Wellesley met George Bellasis at this time and formed a favourable impression of the quiet young man. Fifteen years later there would no surprise in the dedication of George's 1815 book: Views of St. Helena to His Grace Field-Marshall the Duke of Wellington – the victor over Napoleon at Waterloo and the one largely responsible for ensuring that the vanquished emperor was now a prisoner on the island of St. Helena. A later watercolour of 'Randall Lodge' in c1845 by George's son, Major John Brownrigg Bellasis (1806-1890), shows that the house had two storeys, with a high arched verandah all round the lower level, a flat-roofed side-wing, and a garden laid out with a rectangular lawn, edged by cypresses. George suffered recurring bouts of illness in Bombay in the period 1802-1803, and eventually departed for Britain on board the Elphinstone, East Indiaman in August 1804. However, George was was so ill during the voyage that he was forced to disembark at St. Helena on 4 November 1804 to recover his health. He resided on the island for the next eight months [and later revisited St. Helena in 1812]. During these visits he sketched the diverse landscapes and inhabitants of the island and his book Views of St. Helena was published in 1815, with six (6) of his original landscapes engraved in aquatint by Robert Havell. Read more: http://bit.ly/1rMXjNh

Anything from 1900 backwards is a mind-soul journey I would love to read. Such nurturing fulfilling growth.... Nature must have been something for the eyes to enjoy then.