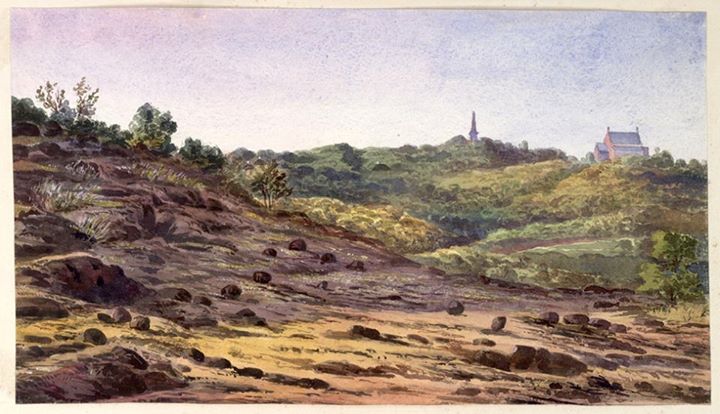 'Mahableshwar. Church and Beckwith Monument. Sketch from a point off the road near the Lake. 23rd November 1871'.

Water-colour painting of Mahabaleshwar by John Frederick Lester (1825-1915), 23rd November 1871. This image is from an album of water-colours made between 1865 and 1877 in Kathiawar, Bombay, Poona, Mahabaleshwar and Savantvadi State. The album cover is lettered in gold: 'Sketches' and inscribed inside the cover: 'J.F. Lester'.

Mahabaleshwar is a popular hill station situated at a height of 1372 metres in the Western Ghats in Maharashtra, western India. It is one of the wettest places in the mountains as it receives heavy rainfall in the monsoon season. This area was made an official British sanatorium in 1828 and became a popular retreat for Europeans escaping the heat of Bombay (Mumbai) and Poona (Pune). Mahabaleshwar's famous â€˜pointsâ€™ offer breathtaking views of mountains covered with evergreen forests and fertile valleys. Sir Thomas Sydney Beckwith (1772-1831) went to India as commander-in-chief at Bombay in 1829 and was promoted to lieutenant general in the following year. He died 15th January 1831 at Mahabaleshwar; the monument dedicated to him is an obelisk about 10 metres in height.