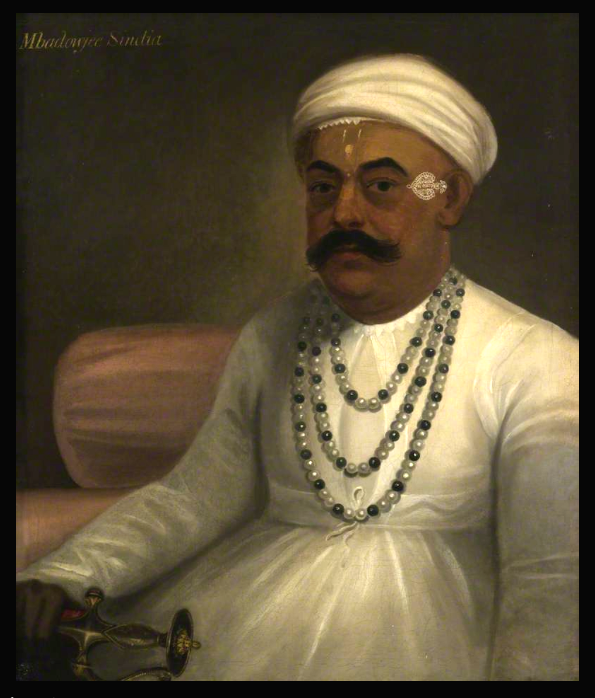 Mahadaji Sindhia, Maratha leader and warrior. He ruled from 1782 to 1794.
By James Wales

Affter Raja Chait Singh (Maharaja Banaras) lost the battle of Benares, Madhaji gave him refuge alongwith his family in gwalior. He made a pact with the English that Raja Chait Singh would not be harmed as he was under the scindia dominions. this happened sometime in 1783- 85.

What an interesting necklace;

Vaidurya Pratap Sahi thank u fr sharing such a info to us.

A contemporary of Maharani AhilyaBai Holkar, He was instrumental in persuading his fellow princes, notably the Peshwa, to accept her as the ruler of the Holkar kingdom, or should I say Queendom!

I think the name should be MAHADAJI SHINDE not sindhia....

Mahadaji Shinde ( Marathi: महादजी शिंदे Mahādajī Śiṃdē ) (ca. 1730 – February 12, 1794) also spelled as Mahadji Scindia or Mahadaji Scindia, was a Maratha ruler of the state of Gwalior in central India. He was the fifth and youngest son of Sardar Ranoji Rao Scindia Mahadaji was instrumental in resurrecting Maratha power in North India after the Third Battle of Panipat in 1761, and rose to become a trusted lieutenant of the Peshwa, leader of the Maratha Empire. Along with Madhavrao I and Nana Fadnavis, he was one of the three pillars of Maratha Resurrection. During his reign, Gwalior became the leading state in the Maratha Empire and one of the foremost military powers in India. After accompanying, Shah Alam II in 1771 to Delhi in order to restore the Mughals in Delhi, under the suzerainty of Marathas,.[2] He annihilated the power of Jats of Mathura and during 1772-73 and destroyed the power of Rohillas in Rohilkhand and captured Najibabad. His role during the First Anglo-Maratha War was greatest from the Maratha side since he humbled the British in Central India, single handed, which resulted into the Treaty of Salbai in 1782, where he mediated between the Peshwa and the British. After the Treaty of Salbai in 1782, he invaded and overpowered the Rajput states, particularly Jodhpur and Jaipur through the Battle of Patan ,the Battle of Medtya and the Capture of Ajmer in 1790. Mahadji became Vakil-ul-Mutlaq (regent of Mughal affairs), and The Mughals also gave him the title of Amir-ul-Umara (head of the amirs) in 1784. Read more: http://bit.ly/1lZUMlx