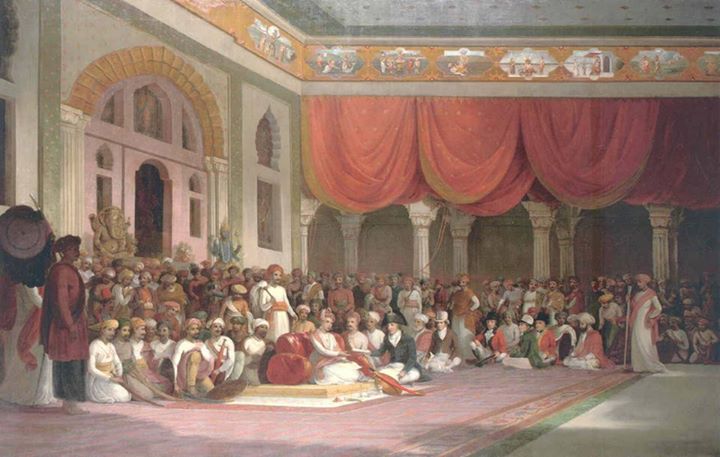 Image:
Sir Charles Warre Malet, Concluding a Treaty in 1790 in Durbar with the Peshwa of the Maratha Empire - 1805

WALES, James (1747-1795) Scottish portrait painter and draughtsman. James Wales was born in Peterhead, Banffshire in 1747. At an early age he moved to Aberdeen and was educated at Marischal College. It was here that he also began to paint modest portraits on tin plates which were sold in Aberdeen for 1 - 1Â½ guineas each. As an artist he was largely self-taught, and he benefited from the early patronage of Francis Peacock in Aberdeen. He married Margaret Wallace (1759-1795), daughter of William Wallace of Dundee and Annie nee Taylor. By 1783 Wales and his family had moved to London, where he is known to have exhibited at least three portraits at the Society of Artists by 1791, and three paintings at the Royal Academy between 1788 and 1789. An amateur artist and East India Company official named James Forbes (1749-1819) had sailed for Bombay as a Writer in 1765. In 1772 he was appointed Member of Council at Anjengo. In 1775 he officiated as chaplain, later secretary, attached to British forces sent to assist Raghunath Rao in the Maratha civil wars until ill-health forced him to embark for England on 1 December 1775. He returned to India in 1777, and served in Gujarat until increased Maratha military activity forced his evacuation in 1782. He travelled to the Malabar coast, then embarked for England, where they landed at Portsmouth on 17 July 1784. Many of his experiences formed the basis of a publication that he published at his own expense in four volumes between 1813 and 1815, entitled Oriental Memoirs. During his extended residency in India James Forbes had also made a significant number of watercolours of the Bombay area. When he returned to England in 1784 he commissioned James Wales to make paintings from two of his sketches. This commission helps to explain, in part, the subsequent decision by Wales to travel to Bombay. Wales applied to the East India Company for permission to work in Bombay in 1790, was granted permission on 5 January 1791, and arrived in Bombay on 15 July 1791. Here he was fortunate to receive commissions from a fellow Scot, (Patrick) Craufurd Bruce (1748-1820), one of the sons of Sir Michael Bruce, 6th. Bart., who served in the East India Company, and was later to become a banker in London. Although Bombay was a smaller and less affluent market than Calcutta or Madras for a British painter, Wales took the initiative and established himself in the small settlement. He gained a reputation, though little is known of his first year in Bombay. Captain Robert William Eastwick (1772-1865) [HEIC] recorded in his memoirs that upon his first arrival in Bombay in June 1792 he had met Wales: "I had brought out with me a letter of introduction to a gentleman at Bombay named Wales, who was a portrait-painter, and a man of considerable influence in his way, for he knew everyone and his services were in constant request. He very kindly interested himself on my behalf, and procured me the appointment of second officer on board the Hormuzeer, a country ship commanded by Captain Meeks, which was then loading a cargo of cotton and opium for China." A Master Mariner. Being the Life and Adventures of Captain Robert William Eastwick. (ed.) Herbert Compton. London: T. Fisher Unwin, 1890 p.68. Wales was fortunate enough in his first year to meet Sir Charles Warre Malet (1753-1815), the Political Resident at the Maratha court in Poona (from 1786 to 1797). Malet encouraged Wales to come to Poona and the first visit took place between July and December 1792. In addition to painting portraits for Malet, Wales painted a number of remarkable portraits of the Maratha chiefs and their ministers. The most impressive surviving example is a group portrait, 'Madhu Rao Narayan, the Maratha Peshwa with Nana Fadnavis and Attendants' (1792: Royal Asiatic Society, London). In this regard Wales was highly influential for his role in introducing European art to the Maratha court, persuading the Peshwa to establish a school for drawing and negotiating the use of a "Bungella" for the display of works of art. Wales returned to Poona for a short time in 1793, again in September-October 1794, and finally, in January and April in 1795. The patronage of Malet and the Maratha court undoubtedly provided Wales with a steady source of income. In addition, in March 1793 Wales met the travelling artists Thomas and William Daniell, who encouraged him to continue his detailed drawings of Indian caves and temples. Read more: http://bit.ly/PE5LSB