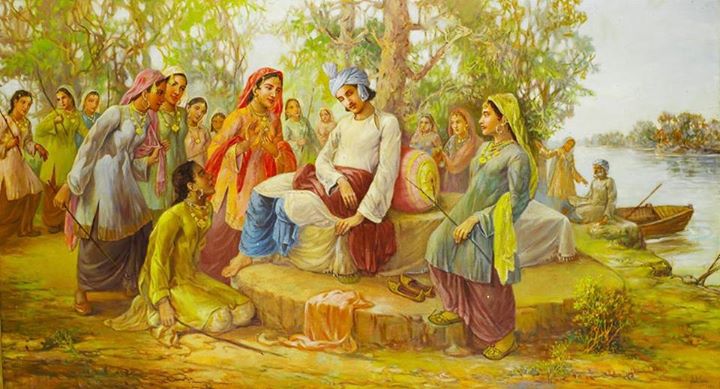 Provenance:
From the private collection of Shahzad Aslam Shaikh; bought by the current owner's grandfather, Shaikh Wazir Mohammed, directly from the artist in the mid 1960s, and then by descent.

This work is the largest painting by the artist to appear at auction to date.

The 'grand old man' of the Western academic style, Allah Bux was given the title of 'Ustad' or 'Master' in deference to his skill and accomplishments as a painter. Equally at ease in watercolor and oil painting, Allah Bux worked from observable phenomena which he later modified in the studio. The artist's utopian landscapes and portraits enjoyed great popular success, but it was for his depictions of the legend of Heer and Ranjha that his name became synonymous with oil painting in Pakistan.

There are many versions of the story of these star-crossed lovers, but the most beloved is the epic of Punjabi poet Waris Shah which is memorized and sung by millions. It is no surprise therefore that the Heer and Ranjha series were much sought after by collectors.

This particular painting depicts the moment when Heer first sets eyes on Ranjha, a young handsome trader from Central Asia, who has lost his way in the forest. Exhausted and hungry, he lay down to rest in what happened to be Heer's private 'takht' or 'nook'. Heer's companions are about to teach Ranjha a lesson for his trespass, when they are stopped by Heer, for whom it is 'love at first sight'. The die is cast, as Heer gazes transfixed at the slumbering hero!

Ustad Allah Bux's practice as a backdrop painter in Lahore's theatres in his early years trained his eye for the sentimental moment in any narrative. In Heer and Ranjha he draws upon his skills as a painter of idyllic Punjabi landscapes. The river running by, the boatman ready to ferry passengers across the water, the trees with their interlaced branches and foliage, all set the scene for a dramatic unfolding of this tragic tale. The artist has reveled in the details of dress and ornament of the young women, yet the female form is discreetly painted so as to be acceptable in a socially conservative milieu.

The palette is carefully modulated, with little reference to the brilliance of the folk costumes of the Punjab. Nor is there a feeling of the sun scorched terrain or intensity of light which is associated with the Punjab. The admiration for a lyrical academic naturalism is quite apparent in the environs created for the Heer Ranjha encounter.

Heer was reputed to be a dark skinned beauty and in this depiction Ustad Allah Bux makes a delicate distinction between her skin tones and those of her young man from the North. None of the faces appear to be based on real portraits, yet Heer is more painstakingly rendered, making her a believable character in the saga. By comparison Ranjha, is a more romanticized figure, as though we encounter him through her eyes; the perfect visage, slender hands, subdued classical attire. The painter relishes the chance to contrast the liveliness of texture afforded by the female figures, with that of Ranjha, the oblivious object of their attention.

Ustad Allah Bux painted innumerable episodes from Heer and Ranjha's story, often at the request of his patrons, both private and public. This particular work is obviously one of his more ambitious and masterly renditions.

how can i take membership of RBSI, sarker_smy@yahoo.co.in

Isn't this a painting by Allah Baksh??Kindly enlighten...