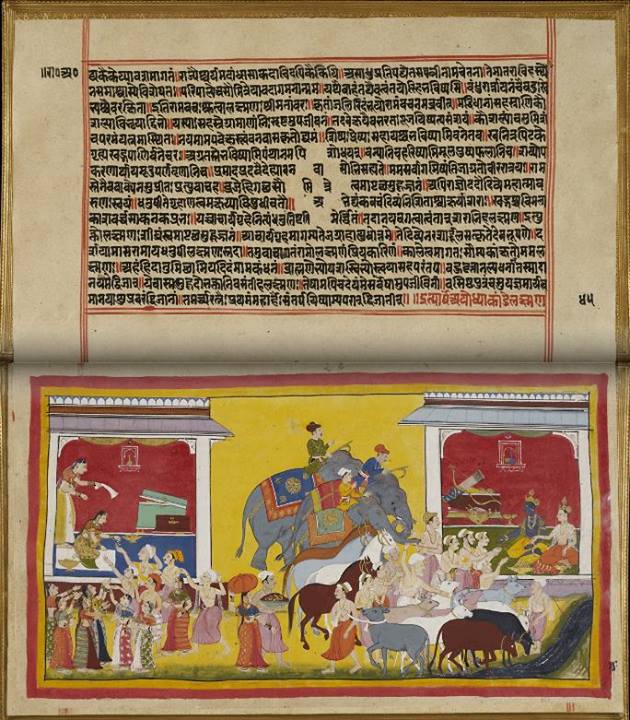 London : Hidden away in the vaults of the British Museum for 164 years, more than 100 stunning paintings from the Ramayana, dating back to the 17th century, went on public display Friday at the British Library's central London galleries.

The Mewar Ramayana paintings were acquired by the then British Museum Library in 1844 in the form of bound volumes, but were only available to scholars.

When their condition began to deteriorate, the British Library had the paintings individually framed.

They are part of 400 paintings and 24,000 verses of text in Sanskrit bound in seven volumes, of which the British Library has four, exhibition curator Jerry Losty said.

"I am thrilled that we are able to display the magnificent Mewar Ramayana manuscript. One of the finest manuscripts of the Ramayana epic ever produced, it vividly illustrates this great story," Losty said.

"This is one of the great secular texts of world literature. Its influence spread not just across India but the whole of Southeast Asia and endures to this day.

"The cumulative effect of seeing picture after picture packed with detail is truly remarkable and offers visitors a unique experience that has previously only been available to a very few scholars," he added.

The exhibition, titled 'The Ramayana - love and valour in India's great epic', is expected to draw large crowds - from art lovers to academics and schoolchildren - before it ends Sep 14.

The nearly 120 paintings on display were given by Rana Bhim Singh of Udaipur to Col. James Tod, a historian of the Rajputs, who brought them back to London in 1823 and presented them to the Duke of Sussex before the British Museum Library acquired them in 1844, a library spokesperson told IANS.

The Museum and Library subsequently split up and the volumes were passed on to what became the British Library, the spokesperson said.

The exhibition will feature loans of paintings, textiles and sculptures from other major collections including the Victoria & Albert Museum, the British Museum and the Ashmolean Museum, as well as shadow puppets and dance costumes from the Horniman Museum. Many of these items have never, or seldom, been publicly displayed.

The Mewar Ramayana manuscripts were produced between 1649 and 1653 for Rana Jagat Singh in his court studio at Udaipur. Illustrated on the grandest scale, with over 400 paintings, the vivid, brightly coloured scenes are packed with narrative detail and dramatic imagery, with no episode of the great epic overlooked.

Two volumes have been identified as being painted by the studio master Sahib Din with other paintings being completed in a related Mewar style, but the volume set in the monkey kingdom of Kishkindha is in an anonymous style heavily influenced by painting from the Deccan, parts of which had long been identified with Kishkindha itself.

Most beautiful Mewari fine art work in tempera with vegetable colors by Sahib Deen, the 16th century traditional costumes depicts Royalty donating wealth to people. Nothing to identify with Kishkinda, no Monkey in this - however अयोध्या कांड लक्ष्मण in red in ms inscribed at bottom- Great find

who is Sahib Deen? any idea about his full biography? What about Mathir ul- Umara? Bibhash Gupta

GREAT WORK , GREAT PEOPLE , GREAT HISTORY..... MERA BHAARAT MAHAAN...... EVERY BHAARATIAN SHOULD BE PROUD OF THIS. KEEP IT Rahul Chemburk