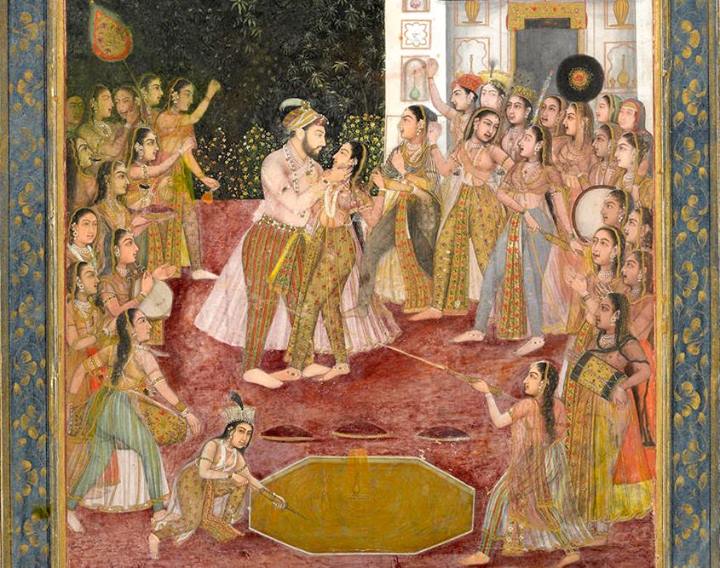 Opaque watercolor and gold on paper; the ruler embraces a courtesan in the center of celebrations surrounded by other members of the zenana and female musicians. Each figure is attired in sumptuous textiles and adorned with elaborate jewelry befitting their stature within the court. The ground is saturated with vermillion colored powder and colored water.

A number of other pages from a 'Lucknow Album', formerly in the collection of Sir Thomas Phillipps bt. (1792-1872), believed to have been compiled in 1785, also bear four line nastaliq inscriptions by Hafiz Nurullah on the reverse. Compare with another page in the National Gallery of Art, Canberra (NGA 91.1398) that also a bears a typed label adhered to the lower edge. The present page is very closely related to a a scene 'Celebrating with Fireworks' in the San Diego Museum of Art, 1990:374. The faces of the female figures are almost identical and their body proportions along with the treatment of their clothing, may even suggest that both pages ares from the same atelier. It would seem likely that the artists responsible for these two pages were among the group that followed the exodus from Delhi to Oudh (Lucknow) around 1775.

Mirza Muhammad Azam Shah (8 July 1653 19 June 1707) was the Mughal Emperor of India and son of Emperor Aurangzeb and Dilrus Bano Begum, and thus a full brother of Muhammad Akbar. Like his brother, Azam Shah married a daughter of Dara Shikoh in 1668.

The Nawabs of Oudh were the originals....long before the word gained fashionable status post 1947.

Arvind do you say that Mughals brought the Holi celebrations to India?

Little wonder then that Kathak grew up in Lucknow!