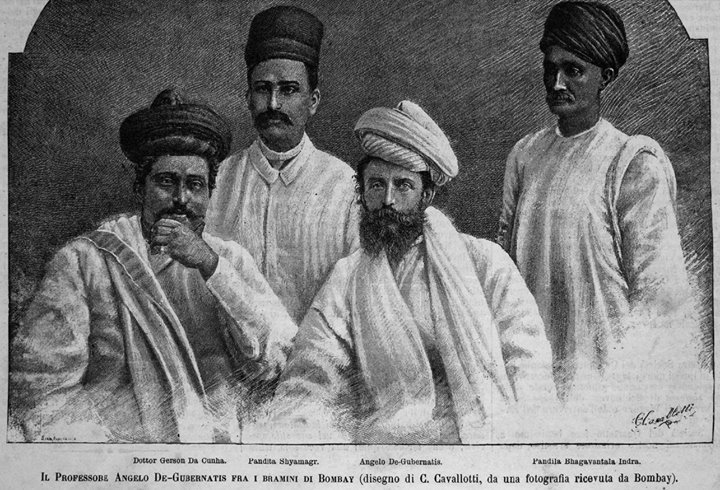 In October 1885, four men got together in a Bombay studio to have a photograph taken of them dressed as Hindu Brahmans. The image itself was made to document and celebrate the event that had just taken place inthe studio: the Italian professor of Sanskrit Angelo de Gubernatis, the only non-Indian of the four, was the object of a Hindu purification ceremony performed by the man portrayed behind him, the illustrious Pandit Bhagwanlal. The main aim of his Indian journey was to gather Hindu religious objects, visit temples, and meet those in charge of the sacred spaces. This Hindu ceremony, the name of which he did not mention, worked for him mainly as a symbolic transformation process. He wanted to legitimise his contact with sacred India, his principal interest. To be the object of such an honour and to appear in a photograph next to three recognised Indian scholars—José Gerson da Cunha, Shyamaji Krishnavarma, and Bhagwanlal—naturally reinforced Gubernatis’s status as the main Italian specialist on India. Interested in increasing the resonance of the event, he made the photograph and the many written descriptions of the ceremony available to various media and publics in India and in Italy.

Through the analysis of the history of a specific photograph, this article will explore various types of cultural dialogues and encounters in the contexts of colonial British India and Italian orientalism during the second half of the nineteenth century. It also confronts us with two geographical spaces that are somewhat outside the scope of most studies on knowledge production in colonial contexts—Florence and Bombay.The city of Florence and the nation of Italy, which lay outside the world of colonialism until the late nineteenth century, appear as surprisingly rich locales for the production of knowledge on India throughout the second half of the century. Bombay, on the other hand, usually more associated with commerce than the more intellectual Calcutta, reveals itself as a city with significant institutions and instruments of knowledge and a multi-religious, multi-ethnic community of scholars.

Image:
Group portrait with José Gerson da Cunha, Angelo De Gubernatis (seated, from left to right), Shyamaji Krishnavarma and Bhagwanlal (standing, from left to right), 1885. Litography. Drawing made by C. Cavallotti after a photograph taken in a Bombay photographic studio on the 10th October 1885. Published in L’Illustrazione Italiana, no 50 (13 December 1885) with the article “De Gubernatis Brahmino”

Person II nd from Left is Shyamji Krishna Varma http://en.wikipedia.org/wiki/Shyamji_Krishna_Varma In 1970s, a new town developed in his native state of Kutch, was named after him as Shyamji Krishna Varmanagar in his memory and honor. India Post released postal stamps and first day cover commemorating him. Kuchchh University was renamed after him.

Wow! I love reading and learning about these rare events. Thank you Rare Book Society of India

I would love to know the difference between all the hats and where they are from.